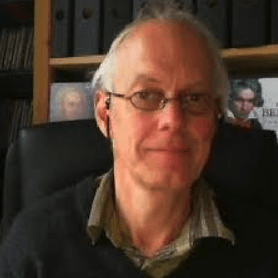 Eduard de Boer (b. 1957) is a Dutch composer, music educator, conductor and pianist. He is also known as his pseudonym: Alexander Comitas .

Eduard de Boer was born in 1957. He studied piano with Thom Bollen, and composition with Hans Kox at the Utrecht Conservatory in Utrecht, The Netherlands. He then studied orchestral conducting with Anton Kersjes at the Maastricht Conservatory in Maastricht, The Netherlands. From 1981 to 1990, he worked as a free-lance pianist for the orchestras and choir of the Dutch radio. After that, he decided to dedicate himself entirely to composing.

Since 1981, he has received a nearly continuous stream of commissions. He composed an orchestral overture on the occasion of the opening of the Enschede Music Centre in 1988, which he later reworked into his “Caucasian Epode” for wind orchestra. For the opening season of the Eindhoven Frits Philips Music Centre (1992), he wrote the cantata “The Wedding of the Moon and Sun”, and composed his first violin concerto for the opening of the Tilburg Concert Hall, in 1996.

Sands” for symphonic wind orchestra. His “Vita Aeterna Variations” for brass band were composed as a response to an invitation to write the A section test piece for the 2012 European Brass Band Competition EBBC in Rotterdam.

His opera with wind orchestra titled “The Emperor’s New Clothes” was premiered at the WMC in 2013. Apart from his composing activities, he has been active as a pianist, as a jury member

of composition and piano contests and occasionally as a conductor of his own works. He also

teaches courses and lectures on composing at the Leopold Mozart Centre of the Augsburg University.

Macbeth. Music after Act I of Shakespeare’s Play