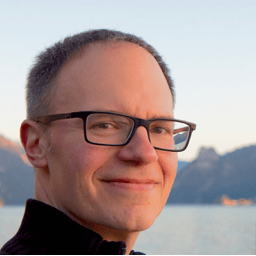 Steven Bryant’s music is chiseled in its structure and intent, fusing lyricism, dissonance, silence, technology, and humor into lean, skillfully-crafted works that enthrall listeners and performers alike. His seminal work Ecstatic Waters, for wind ensemble and electronics, has become one of the most performed works of its kind in the world, receiving over 250 performances in its first five seasons. Recently, the orchestral version was premiered by the Minnesota Orchestra to unanimous, rapturous acclaim. The son of a professional trumpeter and music educator, he strongly values music education, and his creative output includes a number of works for young and developing musicians.

John Corigliano states Bryant’s “compositional virtuosity is evident in every bar” of his 34’ Concerto for Wind Ensemble. Bryant’s first orchestral work, Loose Id for Orchestra, hailed by composer Samuel Adler as “orchestrated like a virtuoso,” was premiered by The Juilliard Symphony and is featured on a CD release by the Bowling Green Philharmonia on Albany Records. Alchemy in Silent Spaces, commissioned by James DePreist and The Juilliard School, was premiered by the Juilliard Orchestra in May 2006. The Chicago Symphony Orchestra’s MusicNOW series featured his brass quintet, Loose Id, conducted by Cliff Colnot, on its 2012-13 concert series.

Notable upcoming projects include an orchestral work for the Detroit Symphony Orchestra (April, 2018), an evening-length dramatic work for the Pittsburgh New Music Ensemble, a choral work for the BBC Singers (July, 2017), a work for FivE for Euphonium Quartet and wind ensemble (2019), and a large work to celebrate the 150th anniversary of the University of Illinois Bands. Recent works include a Concerto for Alto Saxophone for Joseph Lulloff and the Michigan State University Wind Symphony (winner of the 2014 American Bandmasters Sousa Ostwald Award), and a Concerto for Trombone for Joseph Alessi and the Dallas Wind Symphony. Other commissions have come from the Gaudete Brass Quintet (Chicago), cellist Caroline Stinson (Lark Quartet), pianist Pamela Mia Paul, the Amherst Saxophone Quartet (funded by the American Composers Jerome Composers Commissioning Program), the University of Texas – Austin Wind Ensemble, the US Air Force Band of Mid-America, the Japanese Wind Ensemble Conductors Conference, and the Calgary Stampede Band, as well as many others.

Steven studied composition with John Corigliano at The Juilliard School, Cindy McTee at the University of North Texas, and Francis McBeth at Ouachita University, trained for one summer in the mid-1980s as a break-dancer (i.e. was forced into lessons by his mother), was the 1987 radio-controlled car racing Arkansas state champion, has a Bacon Number of 1, and has played saxophone with Branford Marsalis on Sleigh Ride. He resides in Durham, NC with his wife, conductor Verena Mösenbichler-Bryant (Duke University).