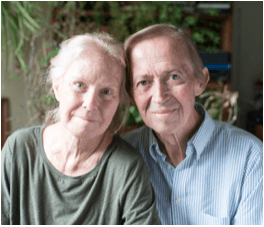 David Maslanka died during the night of August 6th, 2017 at home. He had been diagnosed with a severe form of colon cancer in June. His wife, Alison, died on July 3rd of this year. He declined rapidly following her passing. He is survived by his children, Stephen, Matthew, and Kathryn.The loss of David Maslanka is especially difficult.He was a loving husband and father and always kept his family closest to his heart.For many, we have lost a treasured friend and colleague and mentor.He lived a quiet life and his deep sensitivity to the soul was always communicated in his ability to write music that revealed the beauty of the human spirit.He was contemplative and patient, always thoughtful and understanding to people in a wonderfully sympathetic manner.There is no wonder that he has so many friends and admirers across the globe.

The reasons for the death of someone we have grown to love and to rely on are unfathomable.Words fail to interconnect with each other or to ourselves the deep feelings that lie in all of us who knew and admired him as a musician or a cherished friend.He was deeply and genuinely a fundamental part of our lives.David Maslanka’s music and his honest spirit enabled us to love more deeply, to feel poetic meaning in our lives more clearly and to experience our own lives more fully.Whom of us has heard his music and not clearly felt the wound of a broken heart?It was through that willingness to so vividly expose his personal feelings that he offered an understanding of compassion more clearly.He exposed in us a need to understand clearly the qualities of love and human forgiveness that are so needed today.He has given us much to learn in our lives as human beings.Through his music we will continue to learn and experience all that is pure and honest.

David Maslanka was born in New Bedford, Massachusetts, USA, in 1943. He attended the Oberlin College Conservatory where he studied composition with Joseph Wood. He spent a year at the Mozarteum in Salzburg, Austria, and did masters and doctoral study in composition at Michigan State University where his principal teacher was H. Owen Reed.

Maslanka’s music for winds has become especially well known. Among his more than 150 works are over 50 pieces for wind ensemble, including eight symphonies, seventeen concertos, a Mass, and many concert pieces. His chamber music includes four wind quintets, five saxophone quartets, and many works for solo instrument and piano. In addition, he wrote a variety of orchestral and choral pieces.

David Maslanka’s compositions are published by Maslanka Press, Carl Fischer, Kjos Music, Marimba Productions, and OU Percussion Press. They have been recorded on Albany, Reference Recordings, BIS (Sweden), Naxos, Cambria, CRI, Mark, Novisse, AUR, Cafua (Japan), Brain Music (Japan), Barking Dog, and Klavier labels. He has served on the faculties of the State University of New York at Geneseo, Sarah Lawrence College, New York University, and Kingsborough Community College of the City University of New York, and since 1990 has been a freelance composer. He lived in Missoula, Montana. David Maslanka was a member of ASCAP.

A Tuning Piece: Songs of Fall and Winter (1995) – for Wind Ensemble. Premiered July 1995 at the Kappa Kappa Psi National Convention by the Intercollegiate Honor Band, James Croft, conductor. Symphonic Band; Based on several hymn tunes, it is a piece about tuning and attuning, growing out of perceptions of life after age 50. Commissioned by Kappa Kappa Psi.

Alex and The Phantom Band (2001) – for Wind Ensemble and Narrator.

A Child’s Garden of Dreams (1981) – for Wind Ensemble. Premiered 2/82 at Northwestern University, Evanston, Ill., NU Wind Ensemble, John P. Paynter, conductor. For Symphonic Wind Ensemble, with a large percussion section, harp, piano, and electric organ. This five-movement work is based on dreams of a young girl who was about to die. Commissioned by John and Marietta Paynter.

Angel of Mercy (2015) – for Wind Ensemble. Premiered in January 2016 by the St Olaf Band, Timothy Mahr, conductor, and was written in commemoration of the 125th anniversary of the St Olaf Band. Described as “a prayer for peace in our troubled time”, this piece features a prominent part for bassoon.

Concerto for Trombone and Wind Ensemble (2007) – for Solo Trombone and Wind Ensemble. The concerto was commissioned by a consortium of music schools headed by Conductor Gary Green and Trombonist Timothy Connor of the University of Miami Frost School of Music, and is dedicated to the memory of flutist Christine Nield-Capote. The Concerto for Trombone is composed for an ensemble of 21 wind and brass instruments, double bass, piano, and a substantial percussion group. It is in three large movements, each of a very intense song-like nature. In addition to the solo trombone, the concerto features a prominent supporting solo cello part.

Concerto No. 2 for Piano, Winds, and Percussion (2003) – for Solo Piano and Wind Ensemble

Golden Light – A Celebration Piece (1990) – for Wind Ensemble. Premiered 8/90 at the Cohasset Music Circus, Cohasset, MA: Senior Wind Ensemble of the South Shore Conservatory, Malcolm W. Rowell, Jr., conductor. “Golden Light” was written for a high school wind ensemble. It is a very demanding study in rhythmic independence and speed, and is a fair test of any ensemble. Commissioned by the South Shore Conservatory.

Hosannas (2015) – for Wind Ensemble. Premiered 4/26/15 by the University of Miami Frost Wind Ensemble, Gary D. Green, conductor. Written for the final concert and to commemorate the retirement of Professor Green’s 22nd year career at the University of Miami. The piece is in 7 movements of varying mood. The final movement features tenor voice and is based on a poem by Richard Beale, A Litany of Courage and the Seasons.

Prelude On A Gregorian Tune (1981) – for Young Band. The melody is evolved from a piece of Gregorian Chant; a gentle, sunny piece for young band.

Procession of the Academics (2007) – for Wind Ensemble

Testament (2001) – for Symphonic Wind Ensemble. Written in response to the events of 9/11, Testament is a statement of belief in the healing power of music. Commissioned by L.D. Bell High School Band (Hurst, TX) – Joseph Grzybowski, and Consortium

Traveler (2003) – for Wind Ensemble. Commissioned by the University of Texas at Arlington chapters of Kappa Kappa Psi and Tau Beta Sigma.

Unending Stream of Life: Variations on “All Creatures of Our God and King” (2007) – for Wind Ensemble and commissioned by the Sacred Wind Ensemble, conductor Dr. Scott Bersaglia.

David Maslanka – Give Us This Day