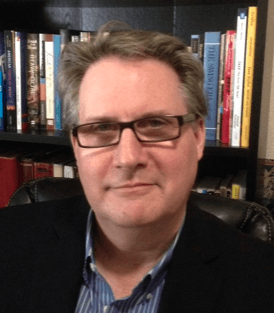 JAMES SYLER (b.1961) was born in Hyde Park, NY and raised in New York and Florida. He received a B.M. degree from Northern Illinois University in 1983 and in a M.M. degree from the University of Miami in 1988. In 1991 he continued his studies at the University of Texas at Austin. He has studied privately with composers Alfred Reed, Karl Korte and Pulitzer prizewinner Michael Colgrass. Equally at ease with modern and traditional techniques, his compositions have been noted for their lyricism and drama. His compositional interests move equally between orchestral, wind ensemble, choral and chamber forms. He has developed a personal style that is eclectic, energetic and innovative, yet able to communicate with diverse audiences. His works have been performed nationally and internationally.

Awards include a 2002 commission from the American Composers Forum in New York to compose the String Quartet No. 1for the Artaria String Quartet of St. Paul, MN, the 1993 National Band Association Composition Award, two grants from the American Music Center in New York, the 1993 Arnald Gabriel Composition Award, and more than 20 commissions to date. In 1998 he established Ballerbach Music, a music publishing company that for 15 years published the works of more than 20 composers. Since 2013, Ballerbach Music is now dedicated to exclusively promoting and publishing his own music.

Mr. Syler has been on the adjunct faculty at the University of Texas at San Antonio since 2001 and teaches private composition lessons, Orchestration, Contrapuntal Techniques, Masterpieces of Music and American Roots Music. From 1998-2001 he was on the faculty at Florida Atlantic University in Boca Raton, Florida and from 1995-1998 at Flagler College in St. Augustine, Florida. Mr. Syler is married to pianist Elizabeth Gutierrez and resides in San Antonio, Texas.

“You really write exactly what you want to write and that is excellent. The pieces are full of energy and musicality …”~ Samuel Adler, The Juilliard School

“His orchestral work entitled ‘Gearbox’ is a brilliant showpiece that surges with energy from beginning to end. Throughout the piece, his gift of lyricism within a dramatic framework is apparent to all who listen.” ~San Antonio Symphony Program Notes

“He writes with heart and has the musical and technical abilities to realize his conceptions. He is one of the few young composers whose music has moved me.”~ Michael Colgrass, Composer

“One thing that is particularly effective about the work ‘Minton’s Playhouse’ is that one feels it is a piece for jazz ensemble, ‘framed’ by the colors and textures of the full wind ensemble.”~ Fanfare Magazine

“James Syler’s ‘Symphony No. 1’ … is a major addition to the wind ensemble repertoire. What immediately strikes the listener about this composition with a title ‘Blue’ is the depth of the text and music and the absence of all of the possible stereotypes …” ~ Leon Bly, World Association of Symphonic Bands and Ensembles

“I listened to your work ‘The Hound of Heaven’ and I like it!I think it’s imaginative and evocative and hope it receives many performances.”~ Morton Gould, Distinguished American Composer