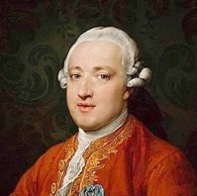 The overture to the opera “Una Cosa Rara” and Divertimenti 2, 3 and 4 in B-flat major by Spanish composer Vicente Martin y Soler are our CompositionS of the Week.
We would like to bring some fresh summer air with these marvelous and rather unknown works for classical wind octet.
While Una Cosa Rara’s overture (as well as some scenes from the opera) were arranged into a suite for wind octet by Johann Nepomuk Wendt, the divertimenti are originals by Martin y Soler.

They were written for classical wind octet as well, although Martin y Soler used basset horns in B-flat instead of clarinets. These divertimenti are related musically to the above-mentioned opera Una Cosa Rara.
They have been recently published as part of the Windependence Chamber Ensemble Series, by Boosey and Hawkes, edited by Patricia Cornett. The basset horns parts having optional parts for Bb clarinets.

Martín y Soler was initiated early into the music profession in his Spanish homeland, beginning as a singer in his native Valencia and working as an organist in Alicante before moving to Madrid, where he wrote various pieces to be inserted into the Italian operas performed there. In 1777 he transferred his activity to Italy, composing operas for the Teatro San Carlo and other theatres in Naples, for the Teatro Regio in Turin, and for various noble houses in Lucca, Parma, and Venice, where he settled in 1782. Three years later, however, Martín y Soler moved to Vienna, where he fulfilled three commissions that together represent the apex of his accomplishment. Three of the operas he wrote for Vienna were on librettos by the celebrated poet Lorenzo Da Ponte: Il burbero di buon cuore (1786; “The Good-Hearted Curmudgeon”), Una cosa rara, o sia bellezza ed onestà (1786; “A Rare Thing, or Beauty and Honesty”), and L’arbore di Diana (1787; “The Tree of Diana”).

Although Da Ponte is best known for his later work with Wolfgang Amadeus Mozart, in his memoirs he assigned a significant role to his work with Martín y Soler in the maturation of his style of libretto writing.

Nearly all Martín y Soler’s operas following his move to Vienna were comic, a genre in which his gift for gracious, lyrical melodic writing was conspicuous. His Viennese operas were by far his most successful. The best known of these is undoubtedly Una Cosa Rara, owing above all to Mozart’s humorous citation of one of its melodies in the second finale of Don Giovanni (1787).