SYMPHONIETTA for Wind Instruments by Willem van Otterloo (The Netherlands, 1907 – 1978) 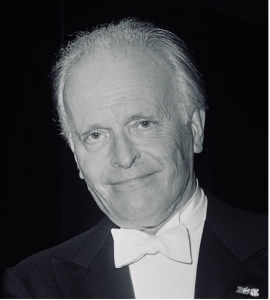 Symphonietta by Dutch composer Willem van Otterloo is our Composition of the Week.

This four-movement work – played without pause- was written in 1943 and published by Donemus in 1948. A new digital version available to purchase was prepared by the same edition in 2013.

Symphonietta has a duration of around 16 minutes, and it is scored for the following instrumentation:

Willem van Otterloo did not envision a career as a conductor from the outset. However, this is how he has become best known. After finishing school, he went to study medicine, but a few years later he enrolled as a student at the Conservatory of Amsterdam. Here he studied the cello and composition. Immediately after his graduation in 1932 he got a position as a cellist with the Utrecht City Orchestra. In this orchestra he started his career as a conductor too; first as second conductor and from 1937 as principal conductor. In 1949 he became the conductor of the Residentie Orkest. He was an esteemed conductor abroad too, conducting orchestras such as the Berlin Philharmonic Orchestra and the Vienna Symphonic Orchestra. From 1971 he was principal conductor of the Sydney Symphony Orchestra.