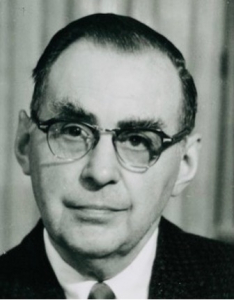 “Skating on the Sheyenne” by American composer Ross Lee Finney is our Composition of the Week.
The work was completed in April 1977 after a commission of the Brooklyn College Band. It was premiered by this ensemble under Dorothy Klotzman, on May 20, 1978.
“Skating on the Sheyenne” reflects several 20th-century compositional techniques, including rhythmic retrograde, aleatory as well as extended tonality. At the same time, depicts images associated with the Sheyenne River in wintertime. The river runs through Valley City before flowing north to Hudson Bay. It usually freezes each year before the first snowfall, providing a long, winding ribbon of ice for the young skaters.

“Skating on the Sheyenne” is cast in three movements, Figure Eights, Northern Lights, and Crack the Whip. It has a duration of 12 minutes and calls for a standard wind ensemble setting, with the addition of the Alto Flute, Double Bassoon, Piano, Celesta, and Double Bass.

Ross Lee Finney studied at the University of Minnesota (with Donald Ferguson) and Carleton College (BA, 1927). He studied with Nadia Boulanger, Edward Burlingame Hill, Alban Berg (from 1931-2), and Roger Sessions (in 1935). Finney taught at the University of Michigan from 1948 to 1973. His students included Leslie Bassett, George Crumb, Roger Reynolds, William Albright, Robert Ashley, Robert Morris, Stephen Chatman, and Robert Cogan.
He received numerous awards, commissions, and honors during his lifetime. Among these are the Pulitzer Prize in 1937; two Guggenheim Fellowships; the Boston Symphony Award in 1956; Brandeis University’s Gold Medal in 1967; membership in the American Academy and Institute of Arts and Letters; and commissions from Yehudi Menuhin, the Koussevitsky Foundation and the Baltimore Symphony. His orchestral works have been performed by such notable orchestras as the Philadelphia Orchestra, Louisville Orchestra, Minneapolis Orchestra, American Composers Orchestra, and the Baltimore Symphony.
His scores, edited by Peters, include works for orchestra, opera, chamber ensembles, keyboard, and choir.

Other band works include: