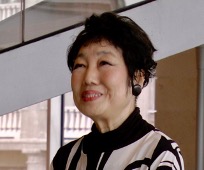 Prism Rhapsody II, by Japanese composer and marimba player Keiko Abe is our Composition of the Week.

Prism Rhapsody II is written for two marimbas and wind ensemble (or orchestra) and it is drawn upon “Conversations in the Forest” and the “Prism Rhapsody” series of compositions. This version for two marimbas was written in 2001 and premiered in 2003. It has a duration of 16 minutes and requires two 5-octave marimbas. The music is available at Steve Weiss Music.

Keiko Abe began playing the xylophone while in elementary school in Tokyo, Japan, studying under Eiichi Asabuki. At age 13, she won an NHK talent contest and began performing professionally on live radio. She attended Tokyo Gakugei University where she completed a bachelor’s and master’s degree in music education. She began working in the Nippon Columbia, NHK and other recording studios while in college.
Abe has been a primary figure in the development of the marimba, both in terms of musical usage and the design of the instrument itself. Her compositions, including Michi, Variation on Japanese Children’s Songs, and Dream of the Cherry Blossoms, have become standards of the marimba repertoire. Abe is active in promoting the development of literature for the marimba, not only by writing pieces herself but also by commissioning works by other composers and encouraging young composers.
In addition to her heavy composing, touring, and recording schedule, Abe is currently a professor at the Toho Gauken School of Music in Tokyo. She was the first woman to be inducted into the Percussive Arts Society Hall of Fame, and the first player to develop a six-mallet technique.
Keiko Abe has developed her position thanks to a rare combination of creative power, acute sensitivity, and virtuosic technique. She commands an overwhelming repertoire and appears regularly throughout the world in performances of solo concertos, chamber music, and improvisations. She is also in demand as a guest lecturer and has given masterclasses in leading music conservatories in North America, Central, and South America, Europe, and Asia.