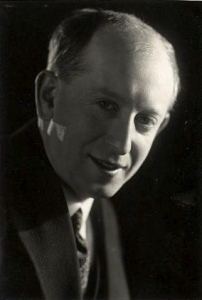 POLKA and FUGUE from “ŠVANDA DUDÁK” (transcribed by Glenn Bainum)

“Polka and Fugue” from the opera Švanda Dudák (Schwanda the Bagpiper) by Czech composer Jaromír Weinberger is our Composition of the Week.

We usually like to feature original works for winds, however, on this occasion, we would love to present you a fine transcription; we do so for a couple of reasons. The band score was transcribed by Glenn Bainum in 1928, which means almost immediately after the premiere of Schwanda, the Bagpiper, which took place in 1927. Although, Polka and Fugue, both from Act 2, had previously become successful concert pieces before Weinberger began seriously to work on the entire opera.
Another reason to feature this work is that Weinberger actually wrote music for winds, such as Prelude and Fugue on Dixie (1940), Mississippi Rhapsody (1940), or Afternoon in the Village (1951), but somehow remaining unknown to the band world, as opposed to Polka and Fugue, who has received hundreds of performances, especially in America.

Weinberger was introduced to American orchestra audiences in 1928 by the eminent Austrian-German conductor Erich Kleiber (a student in Prague in 1911-1912). By 1931, Schwanda had received more than 2.000 performances.
Weinberger’s writing is very suitable for winds, with brilliant and massive brass and percussion, adding the organ for greater grandeur. As a matter of fact, the original orchestral version uses the winds and percussion extensively, including three flugelhorns, a beloved instrument in bohemian folk music.