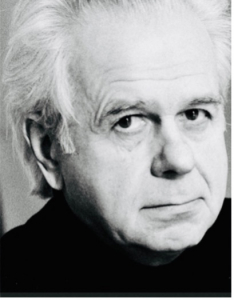 Music for eleven wind instruments and timpani by Russian composer Edison Denisov is our Composition of the Week.

This work was composed in 1961 and premiered some years later, on November 15, 1965, in Saint Petersburg (Leningrad at the time), by conductor Guennady Rojdestvensky.

This is Denisov’s the first serial work.

It is scored for:

Music for eleven wind instruments and timpani has a duration of about 9 minutes and it is published by Edition Peters.

Edison Denisov was born in Tomsk, Siberia, where he studied mathematics at the University. In 1956 he completed his musical studies at the Moscow Conservatory where he was a student of Vissarion Shebalin in composition, Nikolai Rakov in orchestration, Viktor Zuckerman in analysis, Vladimir Belov in piano.
In the 1960s, Edison Denisov devoted himself to an in-depth study of the works of the classical composers of the 20th century, Stravinsky, Bartók, the New Viennese School, and of contemporary western art, Boulez, Nono, Stockhausen, Lutoslawski.

These years correspond to the search for his personal style which tends to assert itself in his vocal and instrumental works. Among these, one must mention “Le Soleil des Incas”, first performed by Guennady Rojdestvensky in Leningrad, then in many European countries and in America.
In the 1970s, Edison Denisov devoted himself to works for large ensembles and wrote most of his concertos, many of which were commissioned by eminent Western soloists such as Aurèle Nicolet, Heinz Holliger, Eduard Brunner, Jean-Marie Londeix.

The 1980s correspond to the composer’s period of maturity. It is determined by characteristic series of intonations, especially motives on seconds and thirds, lyrical and of a very vocal nature. It is often reminiscent of the heterophony of Russian folk songs, with highly diversified rhythms and many difficulties for the performers. Its intrinsic dramaturgy implies a progressive development of the material and important episodes of culmination.

It was during these years that the composer wrote his most important works: the opera “L’Écume des jours”, based on the novel by Boris Vian, premiered at the Opéra Comique in Paris in 1986, the chamber opera “Les quatre jeunes filles”, based on a play by Pablo Picasso, the ballet “Confession”, based on the novel by Alfred de Musset, and the Requiem. He also received two other French commissions, one from the Ensemble Intercontemporain for its tenth anniversary, “Au plus haut des cieux”, and the other from Daniel Barenboim, a symphony for the twentieth anniversary of the Orchestre de Paris, premiered at the Salle Pleyel in 1988, which Barenboim then conducted three times in Chicago in 1991.

Edison Denisov has written numerous film and stage scores and for almost thirty years he collaborated with Yuri Liubimov, director of the Taganka Theatre in Moscow, in staging performances in Russia and various European countries. Since 1959 he has taught analysis of musical forms and orchestration at the Moscow Conservatory, and since 1992 he has taught composition. In 1990 he became the director of the Moscow Association of Contemporary Music.
Edison Denisov was a corresponding member of the Bavarian and Berlin Academies of Fine Arts. In 1986, the French Ministry of Culture named him an Officer of Arts and Letters, and in 1993 he received the Grand Prix de la Ville de Paris.