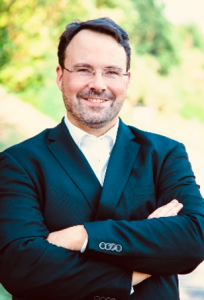 Hope by German composer Hubert Hoche is our Composition of the Week.

The work’s premiere took place on June 1, 2019 during the German Music Festival in the city of Osnabrück and was performed by the Bayern Police Orchestra under Johann Mösenbichler.

This first performance took place during the final round of an International Conductor’s Competition for which Hope was the compulsory piece for the conducting candidates.

Hope was commissioned by the German National Association of Music Federations with the support of the GEMA-Foundation. It has a duration of 14 minutes and it is written for an advanced Wind Band. The work uses a large instrumentation including full double reed section, Contrabass Clarinet, Soprano Saxophone, Flugelhorns, a 5-String Double-bass, Harp as well as a large percussion section.

“Hope is conceived as a set of variations running backwards. The main subject is constructed with a given interval structure whose leading tones will appear throughout the work. A complete rhythm structure will occur at about 2/3 of the composition and at this moment it is possible to distinguish scraps of a melody. Only at the very end the whole theme can be heard but retrograded.” (Composer’s program notes)

Hubert Hoche was born in 1966 in Germany.
After an apprenticeship as carpenter, he studied composition and conducting at the University of Music Franz Liszt in Weimar, followed by postgraduate studies in composition. Further studies with Prof. Michel Philippot (Paris), Bernhard Haitink (Luzern) and Jan Cober (Leipzig).
Participant of the Young Composers Competition in Schloß Weikersheim; winner of the competition „Hochschulforum junger Komponisten“ with his composition „O quae mutatio rerum!?“ which was broadcasted by the WDR; scholarship of the Ministerium für Wissenschaft, Forschung und Kultur Thüringen; winner of the Young Composers Competition in Gera; 1. prize with „Nebelbilder“ for concert band by the Association of German Brass Band Associations (Verband Deutscher Blasmusikverbände); winner of the Young Composers Competition in Gotha with his composition „distortions of a picture“  for orchestra; 1. prize for his composition „From Heaven High“ on the occasion of the composition competition for the 5th German Music Festival 2013 in Chemnitz, awarded by the BDMV and the GEMA Foundation, 2017 first performance of MYSTIKA for concert band, dancer and visual artist (Stadttheater Fürth-Germany)