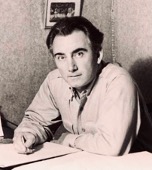 Listen and view the score
https://www.youtube.com/watch?v=4OEs24RHmGA

Tomasi wrote Fanfare Liturgiques (originally Fanfares Concertantes) as part of his opera Don Juan de Mañara; they were premiered in 1947 in Monte Carlo, where Tomasi had recently become conductor of the opera. They were published in 1952, although the full opera was not premiered until 1956 in Munich.

The first fanfare begins with a brilliant acclimation in the horns, but a somber lyric section follows, with a brief recall of the opening theme at the end. The second, with prominent timpani and a dramatic solo trombone recitative takes over, leading to a solemn close. The third depicts the horsemen of the apocalypse galloping with a menacing edge, at a confident, aggressive pace. The theatrical final fanfare, as long as the other three combined, comes from a scene in the opera that takes place in Seville during a Holy Week procession, when a heavenly voice sings to protagonist Miguel Mañara, lifting his spirits after the death of his wife. It begins in percussive mystery and gradually grows in dynamics and intensity under the impassioned pleading of the Spirit of Heaven, as the procession approaches. It fades into calm for an ardent chorale, over which the voice soars again, concluding in a spiritual ecstasy that reminds us of Tomasi’s abiding interest in medieval religious music.

“Fanfares Liturgiques” has a duration of about 20’.