CONFLICTS AND CONFLUENCES, Symphony No.15 for Wind Orchestra by Henk Badings (The Netherlands, 1907 – 1987) 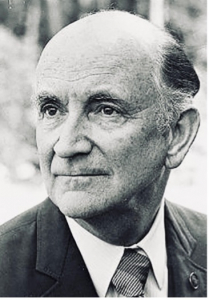 “Cominciere begins with somber and deep sonorities, in a dense and mysterious atmosphere. The texture becomes more complex and leads us to the first allegro. A first thematic idea is presented by the brass, in the form of a fanfare.  This material will dialogue in a recurrent way with the woodwinds, who interact on the material presented in the introduction. After an abrupt break, a calmer moment, “Tranquillo”, contrasts with the initial atmosphere, although, Badings very quickly returns to the first tempo, to conclude the movement with an imposing orchestral tutti.
Adagio molto, the second movement, begins with the first clarinets in soli, presenting a theme, indicated “molto espressivo”, based on open and augmented fourths, and minor seconds. Producing an atmosphere of apparent calm, very expressive and dramatic. The conflict with the brass, based on thematic elements of the first movement will not take long to appear, marked “pesante” in the text. After a moment of great sonorous intensity, the movement returns to the initial calm, culminating quietly with an atmosphere like that of the beginning, with a floating flute line culminating on an unresolved major 9th.
The symphony concludes with a light scherzo presented by the percussion section. The melodic material is entrusted to the timpani, then taken over by a suggestive bassoon solo.
In an alternation of dazzling motifs in the brass and rapid bursts in the woodwinds, a concept presented from the beginning of the work, the movement concludes in an imposing tutti, resolving on a perfect chord of B flat major tenuto in the brass, almost reminiscent of Holst and especially Hindemith.” (Program notes by WASBE Composition of the Week)

Conflicts and Confluences is scored for large symphonic band, including four trombone parts, two euphoniums and two tuba parts, as well as a large percussion section, featured specially in the scherzo finale.

The son of Herman Louis Johan Badings, an officer in the Dutch East Indies army, Hendrik Herman Badings (Henk) became an orphan at an early age. Having returned to the Netherlands, his family tried to dissuade him from studying music, and he enrolled at the Delft Polytechnical Institute (later the Technical University).
He worked as a mining engineer and paleontologist at Delft until 1937, after which he dedicated his life entirely to music. Though largely self-taught, he did receive some advice from Willem Pijper, the doyen of Dutch composers at the time, but their musical views differed widely and after Pijper had attempted to discourage Badings from continuing as a composer, Badings broke off contact.

In 1930 Badings had his initial big musical success when his first cello concerto (he eventually wrote a second) was performed at the Concertgebouw in Amsterdam. Champions of his work included such eminent conductors as Eduard van Beinum and Willem Mengelberg. He held numerous teaching positions, for example at the “Musikhochschule Stuttgart” and the University of Utrecht. Accused after the Second World War of collaboration with the Nazi occupation forces, he was briefly banned from professional musical activity, but by 1947 he had been reinstated.

Badings used unusual musical scales and harmonies (such as the octatonic scale); he also used the harmonic series scale from the eighth to the fifteenth overtone. A prolific artist, he had produced over a thousand pieces at the time of his death in Maarheeze, in 1987. His works include fifteen numbered symphonies, at least four string quartets, several concertos, chamber music works, piano works, and incidental music.
Badings has received many awards for his compositions in the Netherlands and abroad, including the Sweelinck Prize, awarded by the Dutch government in 1972, for his entire production.

Other significant works for Wind Ensemble/Band include