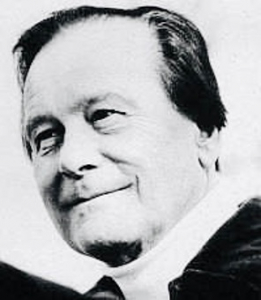 Concerto für Klavier und Blasorchester by German composer Hermann Regner is our Composition of the Week.
This short concerto, of only 11 minutes, was written in 2004, and it is designed for young players.  It is cast in three movements, Toccata, Romanza, and Ballata.
The Toccata is a percussive movement, followed by the slower Romanza, where the piano takes the main role, portraying a calm and tender theme (tranquillo e teneramente). The work closes with the Ballata, which is a cheerful and frolicsome dance movement.
The instrumentation chosen by Regner is that of the standard wind band, with the addition of double bass, contrabassoon, harp and a large percussion set, including a bicycle bell.
The concerto is available at Thomi-Berg Musikverlag, Germany.

Hermann Regner was born in Marktoberdorf, in the southwest of Germany. He produced a wide range of works as a composer, as well as a series of works designed to be used in teaching. Thanks to his relationship to Carl Orff, he lectured and taught around the world, spreading the principles of the widely known Orff Method, based on musical imitation and improvisation by using a specific set of musical instruments.
He was the author of works for piano, violoncello, choir, chamber music, orchestra as well as books, articles, radio shows and films on music education subjects.
During his years as a teacher at the Trossingen Academy, he devoted himself teach music through performance in band, being active as a bandleader and a composer of many works for wind ensemble and band.
During those years, he was also the editor of a series of chamber music for wind instruments. Since 1956 he published the series SPIEL IN KLEINEN GRUPPEN (Playing in small groups) that has in the meantime reached practically 100 numbers.
In 1964 he became Professor of musical education at the Orff Institute in Salzburg’s Mozarteum, in Austria, becoming professor emeritus in 1993.