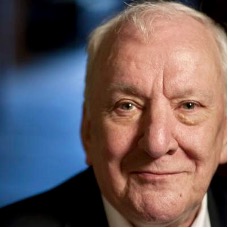 Concerto for Trumpet and Wind Orchestra by British composer Sir Richard Rodney Bennett is our Composition of the Week.
The work was commissioned by former WASBE President Timothy Reynish for Martin Winter and the RNCM Wind Orchestra. It was premiered on September 17, 1993, at the BASBWE Conference.
It is scored for solo trumpet and the following setting:

It has a duration of 20 minutes, and it is structured in three movements.

“The Trumpet Concerto was written in New York between April and June 1993 and is dedicated to Timothy Reynish. The work begins with a solemn declamatory 3/2 cadenza for the soloist; s short orchestral interlude leads to a 3/4 allegro, the pulse twice that of the cadenza, with spiky cross-rhythms alternating with the declamatory passage, followed by a faster 6/8.
A further cadenza ends the movement, and links to the second. This has the subtitle, Elegy for Miles Davis, a deeply felt ballad accompanied by electric bass and band, with a central section with scope for improvisation. The ensuing vivo, 2/2, starts with a bold statement by the trumpet, its cross rhythms reminiscent of the opening allegro; an extended development of this for the orchestra is interrupted by the declamatory cadenza material, the solo trumpet supported by his colleagues in the orchestra, and the movement ends with a molto vivo coda of tremendous energy. The scoring is for wind ensemble with piano and harp.” (Program Notes by Publisher)

Rodney Bennett’s mother was a composer who studied with Gustav Holst, John Ireland, and Constant Lambert, but gave it up once she was married. His mother continued to perform on piano and worked as a music reviewer.

He has composed for a wide number of genres including opera, ballet, chamber music, symphonies, and film music, including Murder on the Orient Express and Four Weddings and a Funeral. As a pianist, Richard Rodney Bennett has collaborated with Thea Musgrave and jazz vocalist Marian Montgomery.

His first work for wind orchestra was Morning Music, commissioned by BASBWE for the 1987 WASBE Conference in Boston; this was followed by The Four Seasons commissioned by the Cheltenham Festival and premiered in 1991 by the RNCMWO. Both were commissioned with funds from the Arts Council of Great Britain.
His own transcription for double wind quintet, Reflections on a Sixteenth Century Tune is his last piece for winds, in 1999.