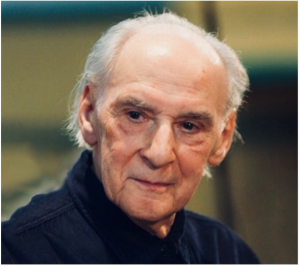 Austrian-born British composer and conductor Joseph Horovitz passed away on February 9, 2022, his work Bacchus on Blue Ridge is our Composition of the Week.
The work is written in three movements, reminiscent of Copland and Gershwin. It has a duration of 19 minutes, and it is set for a standard symphonic band setting. It was written in 1974. The final symphonic wind band version was published in 1983. It has become, ever since, a beloved number of many European band concert programs.

“The Blue Ridge Mountains of North America have inspired many composers, the melodic and rhythmic patterns associated with that region provide a wholesome rustic diet, which may balance our urban sophistication. The three movements of this work are composed on simple symphonic structures, but they include a programmatic element linked by the idea of Bacchus, the God of Wine, Women, and Song. To me personally (and probably without conscious foundation), Bacchus has always been a rather jazzy city dweller, which occasionally leaves the rat race of Olympus for a weekend in the country. The course of this work may be taken as a light-hearted illustration of such thoughts. Jazz elements mingle with country-dance, Blues merge with prairie-style, and Valse de Paris is subdued by hoedown. The composition went through many forms from 1974 onwards and was realized in its final stage for symphonic Wind Band at the end of 1983.” (Program notes by the composer.)

Joseph Horovitz studied music and modern languages at New College, Oxford, and later attended the Royal College of Music in London, studying composition with Gordon Jacob. He then undertook a year of further study with Nadia Boulanger in Paris.
His musical career began in 1950 when he became music director at the Bristol Old Vic. He was subsequently active as a conductor of ballet and opera and toured Europe and the United States.

Horovitz has been professor of composition at the Royal College of Music since 1961, and a council member of the Composers’ Guild of Great Britain since 1970. Between 1969 and 1996 he belonged to the board of the Performing Rights Society. His works include 16 ballets, including Alice in Wonderland (1953), two one-act operas (The Dumb Wife and Gentlemen’s Island), and concertos for violin, oboe, clarinet, bassoon, trumpet, euphonium, tuba, and percussion, as well as a popular and often performed jazz concerto for harpsichord or piano. In 1959, he was awarded the Commonwealth Medal, and since then he has received many other awards for his compositions.

Many of his works have been written for wind orchestra and brass band; among them, we can mention:

Watch the interview of Joseph Horovitz at the Royal College of Music (2007)
https://www.youtube.com/watch?v=LPDzzzruxBI