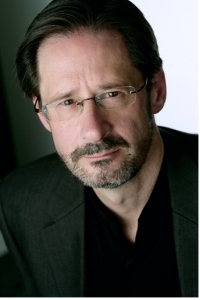 For Solo Cello and Orchestral Winds

Voyages by American composer Steven Stucky is our Composition of the Week.
The work was composed between mid-1983 and mid-1984 and was commissioned by the Yale University Band and written for cellist Lynden Cranham. The first performance took place in New Haven on 7 December 1984, with Thomas C. Duffy conducting.

Voyages has a duration of 26 minutes and it is scored for Orchestral Winds. The detailed instrumentation calls for:

“Although the music of “Voyages” for cello and wind orchestra is continuous, it falls into four distinct sections, or movements: slow-fast-slow-fast. The first movement is a kind of catalogue of musical materials—a few chords, fragments of melody, gestures, and musical textures. Each of the three succeeding movements uses these same materials in new ways; each is patterned on the first movement, but each more loosely than the last. In this way, the whole composition creates a series of concentric circles orbiting around the central nucleus of musical ideas—”voyages” outward from the work’s opening. But each movement has a character of its own, too. The second, a scherzo in near-perpetual motion, is dominated by ostinato figures. The slow third movement offers solos and duets for English horn, bass clarinet and bassoon, tuba and solo cello. The finale combines many elements, but most prominent is a series of brass fanfares alternating with a set of variations for the soloist accompanied by small groups of instruments. Having long wanted both to write something for solo cello and to try my hand at writing for wind ensemble, I decided that to combine these two projects might provide very interesting compositional challenges and opportunities.” Program Notes by Steven Stucky

Steven Stucky was born on November 7, 1949, in Hutchinson, Kansas. He studied at Baylor and Cornell Universities with Richard Willis, Robert Palmer, Karel Husa, and Burrill Phillips.
Stucky wrote commissioned works for many of the major American orchestras, including Baltimore, Chicago, Cincinnati, Dallas, Los Angeles, New York, Minnesota, Philadelphia, Pittsburgh, St. Louis, and St. Paul. He was long associated with the Los Angeles Philharmonic, where he was resident composer 1988–2009.

His Second Concerto for Orchestra (2003) was recognized with the Pulitzer Prize for Music in 2005.

You can see the score here: