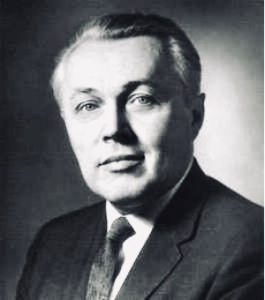 Trittico, by Czech composer and conductor Václav Nelhýbel is our Composition of the Week.
Trittico was composed in 1963 for Dr. William D. Revelli who gave the first performance of the work in the spring of 1964, in Ann Arbor, with the Symphonic Band of the University of Michigan.
It has a duration of around 10 minutes, and it is structured in three movements.

The first and third movements are, in several ways, related to one another: their character is brilliantly forward moving and energetic; the main theme of the first movement reappears in the culmination point of the third movement, and the instrumentation of the movements is identical (standard), with the individual instruments themselves being used quite similarly.

The second movement is a strongly contrasting dramatic scene with turbulent recitatives and expressive woodwind solos, punctuated by low brass and percussion. The emphasis is on the woodwinds and the low brass; cornets and trumpets enter only at the very end with an extremely intense phrase to conclude the movement. The dramatic character is underlined by the strong use of percussion which is extended by a second timpani player, piano and celesta.

Václav Nelhýbel studied composition and conducting at the Prague Conservatory of Music and musicology at the universities of Prague and Fribourg, Switzerland. As a student, he was already affiliated with Radio Prague as composer and conductor. At age 18, he was conducting the Czech Philharmonic as an assistant to Rafael Kubelik. By 1948, he had become active in Swiss National Radio as composer/conductor, and from 1950 to 1957 he served as co-founder and music director of Radio Free Europe in Munich. During this time, he functioned as guest conductor with numerous European orchestras, including the Vienna Philharmonic, Munich Philharmonic, Bavarian Symphony, and Orchestre de la Suisse Romande. Beginning in 1957 he lived in the United States, becoming a U.S. citizen in 1962, and was active as a composer, conductor and lecturer up to his death in 1996.

Other works for winds by Nelhýbel include: