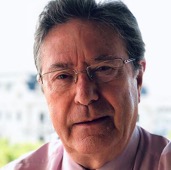 Tierra Mítica, by Spanish composer, conductor, musicologist, and writer Bernardo Adam Ferrero is our Composition of the Week.
WASBE wishes to pay tribute to his memory on the occasion of his passing last week.

Terra Mítica, a symphonic poem written in 1999, was premiered in Valencia, on July 8, 2000, being the compulsory piece in the highest category of the famous “Certamen” of that year.
It was also a compulsory piece during the “32 Certamen Internacional de Bandas de Música Vila d’Altea” in 2003, in Alicante, Spain.
It is structured in four movements:

Tierra Mítica is scored for a large symphonic band setting, following the Spanish tradition, with the addition of soprano saxophone, flugelhorns, cellos and double bass as well as a large clarinet section.  It has duration of 19 minutes.

He has lectured in orchestral conducting and music education, given master classes, and served on the jury of numerous competitions, both performance and composition in Spain, Italy, Argentina, Bolivia, Cuba, Italy, Austria, France and the United States. His musical production has been premiered in Spain, USA, France, Germany, Holland, Belgium, Portugal, Canada, Great Britain, Italy, Bolivia, Denmark, Sweden, Japan, Argentina, Cuba, Mexico, Brazil, Venezuela, China and Australia.
His output was very important, covering a span of more than 50 years. He has composed for symphony orchestra, chamber orchestra, chamber music, band, as well as music for the screen. His music is preserved in the National Library of Madrid.
Bernardo Adam Ferrero received countless prices and recognitions.  Among other the MidWest Clinic Medal of Honor (1983), “Batuta del Gran Teatro de La Habana” (1991), Order of Merit of the John Philip Sousa Foundation (1992), “Euterpe Price” Valencian Community (2003).

Other works for wind band include: