THE LEAVES ARE FALLING by Warren Benson (USA) 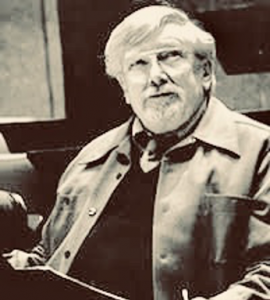 THE LEAVES ARE FALLING

Warren Benson’s The Leaves are Falling is our Composition of the Week.

The Leaves Are Falling was composed between 1963 and 1964. It has a duration of about 11 minutes and is written for a large Wind Ensemble, including Contrabassoon, Contrabass Clarinet, Soprano Saxophone, 3 cornets and 3 trumpets parts, String Bass and Harp.

The music is Benson’s statement of grief and vivid reaction after the assassination of President John F. Kennedy.

Rainer Maria Rilke’s Poem Autumn, used as a source of inspiration, resumes the composer’s feeling on that historical event.

“The Leaves Are Falling introduced to the large wind ensemble-band literature a kind of music which in its single movement length and introspective character was unknown to that time. The work was commissioned by Kappa Gamma Psi, a small national music fraternity of which Frank L. Battisti, Ithaca, N.Y., was an officer. It was through him that the commission came about. It was to have its premiere performance on the American Music Festival of May 1964, by the Eastman Wind Ensemble under Clyde A. Roller, conductor, in the Eastman Theatre of the Eastman School of Music, Rochester, New York.” Program Note from the score

Warren Benson was one of the founding members of our organization, and the author of WASBE’s Statement of Understanding, which expresses the organization underlying philosophy upon which all WASBE activities are based.