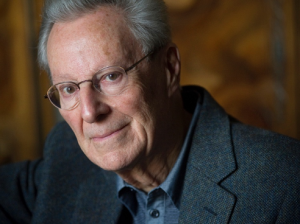 Tetrade by French composer Roger Boutry is our Composition of the Week.

It’s been just one year since the passing of maître Roger Boutry, and this presentation humbly honors his memory.

He was a virtuoso pianist, renowned and internationally recognized conductor, ingenious and elegant arranger, as well as a great composer.

Roger Boutry was admitted at 18 years of age, in 1944, to the Conservatoire de Paris. Among his teachers were Tony Aubin, Louis Fourestier and Nadia Boulanger. His was the recipient of the Grand Prix de Rome in 1954 and a finalist at the International Tchaikovsky Competition in Moscow in 1958.

His teaching career at the Conservatoire began in 1962, teaching harmony until 1997. He conducted all major orchestras in France, notably the famous Garde Républicaine, being its chief conductor for over 25 years.

Tetrade was written in 1995, it is cast in four movements and has duration of about 13’ minutes. It was the compulsory piece of the International CISM Contest of Aix-les-Bains, France.

Tetrade was written for the Garde Republicaine, even though this famous band has a large instrumentation, Boutry uses sparingly the tutti, choosing instead a very delicate and refined orchestration, giving priority to transparency and lightness. Tetrade uses enlarged harmonies and jazz elements. There are several challenging solos throughout. To the standard wind band setting, a double bass and a harp are added.

A complete list of Boutry’s works can be found here: