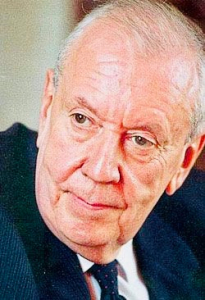 Celebrating the 100th anniversary of the birth of British composer and trumpeter Sir Malcolm Arnold, Tam O’Shanter Overture Op. 51 is our Composition of the Week.

Tam O’Shanter was first performed at a Henry Wood Promenade Concert on August 17, 1955, with Malcolm Arnold himself conducting the Royal Philharmonic Orchestra.

The music, programmatic in its structure, is based on the famous narrative poem by the Scottish poet Robert Burns (1759 – 1796).
Tam O’Shanter, the title, and hero of the poem is a drunken farmer who, while riding home late from Ayr, on a stormy night, disturbed a witch’s party in the haunted church of Alloway. The hags pursued him to the keystone of the bridge over the River Doon but had to stop there as they could not cross running water. One witch, however, plucked the tail from his mare. Nevertheless, Tam arrives safely at home, but faces one last peril, heard in the closing measures, when his shrewish wife reacts poorly to his account of the evening.

John Paynter, legendary director of bands at Northwestern University, created the band adaptation of this work, which was published in 1991 by Carl Fischer.
Tam O’Shanter has a duration of around 8 minutes, and it is scored for full symphonic band, including Contra-Alto Clarinet, Contrabass Clarinet as well as String Bass, Harp, and Celesta.

Malcolm Arnold was born in Northampton in 1921. After studying at the Royal College of Music in London, he joined the London Philharmonic Orchestra, becoming principal trumpet in 1942. In 1948, he received the Mendelssohn Fellowship and left the orchestra to spend a year in Italy. On his return, he quickly established a reputation as a versatile composer and brilliant orchestrator, which led to numerous commissions. Since then, he has composed for all kinds of ensembles: for professionals as well as amateurs, for theater, concerts, and cinema (more than 80 film scores including The Bridge on the River Kwai and Inn of the Sixth Happiness, which won him an Oscar and an Ivor Novello Award respectively).

In 1970 he received the title of Commander of the Order of the British Empire. He holds honorary Doctor of Music titles from the Universities of Exeter (1969), Durham (1982), and Leicester (1984). He was made a Fellow of the Royal College of Music in 1983. He is also an honorary member of the Royal Academy of Music. In 1986 (his 65th year), he won the Ivor Novello Prize for “outstanding services to British music”. In 1993, he was awarded a knighthood for services to music.

The roots of Malcolm Arnold’s music lie in dance and song. His music has a luminous texture and a clear design. His lighter pieces, easy to listen to and rewarding to perform, are among the few contemporary equivalents of the serenades and divertimenti of the 18th century. An inexhaustible composer of melodies with which he lavished his audience, the “big tune” of his modest Toy Symphony, for example, enjoys the same success as the many memorable themes of the major works. Many of these tunes are now part of the concert repertoire. But to the listener, beneath the attractive surface, his works frequently reveal a complex musical personality and enormous tensions. In fact, in some ways, Malcolm Arnold’s music reveals his deep interest in the human condition and his belief that music is “a social act of communication, a sign of friendship, the strongest there is”.