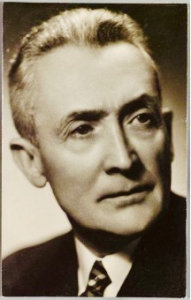 Symphony Nr.4 by Belgium composer Arthur Meulemans is our Composition of the Week.
Written in 1935 Meulemans’ 4th symphony belongs to a final output of fifteen symphonies, all written for symphony orchestra, number 4 being the only one written for winds and percussion.
It was premiered in 1939 by the Belgium Radio Orchestra, under Franz André, great advocate of contemporary music of his time, and especially that of his fellow countrymen.

There is currently no modern edition of this work, which remains relatively unknown to the large wind ensemble community. There has been an edition in 1965, which contains many inconsistencies with the manuscript of 1935. The rights of the symphony belong to the Meulemans Foundation (within the Peter Benoit Fund from 2004).
A reprint of the manuscript was published in 208 by Musikproduktion Höflich (Germany) and it is available through Presto Music.
Joseph Patrick Scott, American, Doctor of Musical Arts, prepares a new critical edition including saxophones, euphonium and double bass, that hasn’t been published yet.

Meulemans studied at the Lemmensinstituut in Mechelen with, among others, Edgar Tinel, Aloys Desmet, and Oscar Depuydt. After completing his final exams, he became a teacher at this institution and remained so until 1914. He got married in 1911 and settled in Tongeren, where he taught music at the Koninklijk Atheneum (a high school). This situation lasted until 1930, the year in which Meulemans was appointed as conductor (together with Fernand Quinet) of the newly founded Vlaams Radio Orkest in Brussels, which nowadays is known as the Brussels Philharmonic. In 1916, he found the Limburge Orgel- en Zangschool in Hasselt. From 1932 until his death, Meulemans lived and worked in Brussels. In 1954 he was also appointed as the president of the Royal Flemish Academy.
Meulemans composed a big symphonic oeuvre and, with his more than 350 pieces, is one of the most productive and well-known Belgian composers of the first half of the 20th century. He was born during the late romantic period and lived through the impressionism period during his teenage years. His greatest accomplishments are expressionistic. His style evolved from a romantic style to a more modern way of working, but throughout his work a strong lyricism remained a constant element.

Meulemans orchestration was tight, but colourful. His music shows a certain harmonic severity, but he does not leave tonality. A major part of his compositions are of a descriptive-programmatic sort, often related to his homeland Flanders.

Taken apart his 15 symphonies, Meulemans wrote three operas, solo concerti for many different instruments, five string quartets, songs, oratorios and choir works, as well as many works for Fanfare Orchestra. This type of ensemble is very popular in the Benelux countries (The Netherlands, Belgium, Luxembourg), to some extent this ensemble was also popular at the beginning of the 20th century in France, and in the French-speaking part of Switzerland. Some music organizations from the latter countries still are named Fanfares, even though the instrumentation does no longer match that of the Fanfare Orchestra, composed exclusively of brass instruments, saxophones, and percussion.
Some works by Meulemans for Fanfare Orchestra from the time of Symphony Nr.4 include:

For symphonic band and mixed choir