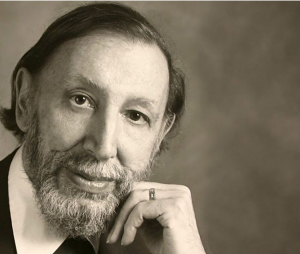 Symphony No. 17, Op. 203 by American composer Alan Hovhaness is our Composition of the Week.

Subtitled “Symphony for Metal Orchestra”, this very unusually scored work was written in 1963 on a commission from the American Society of Metals. The special “metal orchestra” comprises six flutes, three trombones and five metal percussion instruments, including chimes, glockenspiel, tam-tam and two vibraphones.

Symphony 17 has a duration of about 23 minutes, its difficulty is rather moderate, and it is written in four movements:

“This is a very beautiful and peaceful work from a composer more concerned with creating a work of art than receiving profit and audience approval. The real pity is that his music is largely unknown by today’s conductors, which means that the next generation of musicians will hardly know him at all” (Rodney Winther).

Other significant works by Alan Hovhaness for winds are

Alan Hovhaness was one of the most prolific 20th-century composers, with his official catalogue comprising more than 500 works. He was inducted into the National Institute of Arts and Letters in 1951 and received an honorary doctor in music degrees from the University of Rochester (1958), Bates College (1959) and the Boston Conservatory (1987). He moved to Seattle in the early 1970s, where he lived for the rest of his life.

In July 1934, Hovhaness traveled to Finland to meet Jean Sibelius, whose music he had greatly admired since childhood. They continued to correspond for the next twenty years.