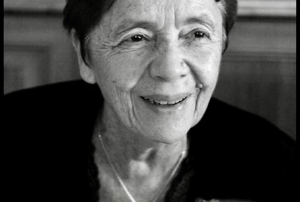 and uses a standard symphonic band setting, except for 2 baryton and 2 euphonium parts, as well as 4 trombones and 6 percussionists. It has a duration of 28 minutes and it is available at Molenaar Editions.

“The Spring Symphony takes its title from its first movement. Although the movements are named after seasons, this symphony is not an allegorical work: each of them is a profound moment or cycle.
The two most important movements – Incantatory and Final – are situated at the springtime of Life, when the sap rises, bursts and blooms in Joy. These two movements – Spring and Summer – accompany the growth of Light.
Autumn and Winter – “Poetic” and “Unreal” – mark a return to oneself, favourable to meditation, to the inner life, premise of the ripening of the great transmutations.” (Program notes by Composer)

Ida Gotkovsky was born on August 26, 1933, in Calais, in the north of France.
She studied counterpoint under Noël Gallon, harmony and analysis under Olivier Messiaen, and composition under Tony Aubin and Nadia Boulanger in the Paris Conservatory of Music. Gotkovksy has received many awards and distinctions, including the Prix Blumenthal (1958), the Prix Pasdeloup (1959), the Prix de Composition International de Divonne les Bains (1961), the Medaille de la Ville de Paris (1963), the Prix Lily Boulanger (1967), among others.

Through Messiaen’s tutelage, Gotkovsky showed a pronounced interest in his techniques of composition. Her compositions range from pensive and introspective to brilliant and virtuosic. Nadia Boulanger was also influential to her compositional style.

Other significant works for wind orchestra by Ida Gotkovsky include: