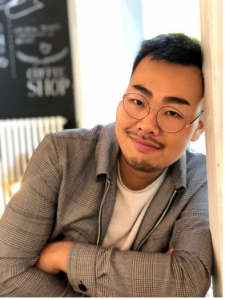 Shapes of Crimson, by South Korean composer Minchang Kang is our Composition of the Week.
Shapes of Crimson has a duration of 8 minutes, and it is scored for (almost) two identical wind ensembles, using 1111.Sax/2121.harp.accordion. These two groups are disposed on the stage in a V shape.
Back, in the center of the stage there is a piano, a celesta as well as two percussions posts on each side. The soloist is placed right in the center of the stage, in front of the conductor.
Shapes of Crimson use the spatialization and sound imitation of the two groups as a compositional resource.
It was premiered on June 12, 2022, at the “Cité de la Musique et de la Danse”, Strasbourg, France, and the Music Academy Wind Ensemble, under Miguel Etchegoncelay.

“Inspired by a painting by Mark Rothko, the title is also related to his painting. In his paintings, I felt the strong vitality, dynamism, and rhythm of the brush strokes of the intense crimson and red colors, so I tried to project them into the trumpet concerto based on these expressions. You will find it in this piece that the intense red lights dance as if it burns, and at the same time the faded crimson wave close to darkness rippling around…” (Program Notes by Composer)

Minchang Kang was born in Ulsan, South Korea.
He obtained his bachelor’s degree with honor (Summa cumme laude) in Hanyang University in Seoul, South Korea. Later on he earned a master’s degree at the Haute École des Arts du Rhin (HEAR) in Strasbourg, France, working mainly with Professor Daniel d’Adamo.
He has participated in master classes of composers Young-hee Park, Unsuk Chin, and Javier Torres Maldonado. He has also worked with “Ensemble imaginaire” and “Quatuor Tana”.
One of his works was selected for the “Festival Musica” for Contemporary Music in Strasbourg, France, and broadcast live in France3 Radio Station.
In 2021, he has earned the 3rd prize from Toru Takemitsu International Composition Awards.

Minchang Kang likes to focus on the compositional movements of phenomenal music, as well as on the gradual changes that occur in each musical fragment in the transformation of color and volume.