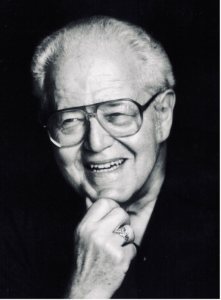 On the 100th anniversary of the birth of American composer, arranger and conductor Alfred Reed, we have chosen his Russian Christmas Music as our Composition of the Week.

Russian Christmas Music was written in 1944 and was commissioned only 14 days before it was scheduled to be performed and broadcast live on NBC. The work was first performed in December of that year in Denver, Colorado. Two years later, the piece was elaborated and revised, and in that form was one of the three prize-winning works in the 1947 Columbia University Contest for new serious music for symphonic band.

An ancient Russian Christmas carol (Carol of the Little Russian Children) is mixed with motives from orthodox liturgical music from the Eastern Orthodox Church. Though set as a single piece, the composer originally subtitled the four easily separated sections Children’s Carol, Antiphonal Chant, Village Song, and Cathedral Chorus. Since its premiere Russian Christmas Music in one of the most performed pieces by Reed as well as of the concert band literature.

Alfred Reed began his musical studies at age ten on trumpet, and by high school age he was performing professionally in the Catskills at resort hotels. He served as a musician and arrangement during World War II in the 529th Army Air Force Band, for which he created more than 100 works, and following the war was a student of Vittorio Giannini at Juilliard. He was a staff composer and arranger for both the National Broadcasting Corporation and the American Broadcasting Corporation. In 1953, he became conductor of the Baylor Symphony Orchestra at Baylor University in Waco, Texas, at the same time completing his academic work; he received his B.M. in 1955 and his M.M. in 1956. His master’s thesis was the Rhapsody for Viola and Orchestra, which later was to win the Luria Prize. It received its first performance in 1959 and was subsequently published in 1966. During his two years at Baylor, he also became interested in the problems of educational music at all levels, especially in the development of repertoire materials for school bands, orchestras, and choruses. This led, in 1955, to his accepting the post of editor at Hansen Publishing in New York.
In 1966 he left this post to join the faculty of the School of Music at the University of Miami, holding a joint appointment in the Theory-Composition and Music Education departments, and to develop the unique (at the time) Music Industry degree program at that institution, of which he became director.

With over 250 published works for concert band, wind ensemble, orchestra, chorus, and various smaller chamber music groups, many of which have been on the required performance lists in this country for the past 20 years, Mr. Reed was one of the nation’s most prolific and frequently performed composers.

His work as a guest conductor and clinician took him to 49 states, Europe, Canada, Mexico, Japan, Australia, and South America, and for many years, at least eight of his works have been on the required list of music for all concert bands in Japan, where he was the most frequently performed foreign composer today. He left New York for Miami, Florida, in 1960, where he made his home until his death.