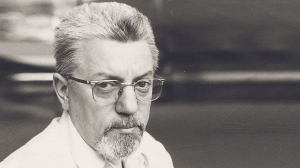 Rheinische Kirmestänze by German composer Bernd Alois Zimmermann is our Composition of the Week.
This suite for 13 wind instruments was written in 1950. It was then revised in 1962 prior to its premiere, on August 13, 1963.
Rheinische Kirmestänze, that we could translate as dances from the Rhine fairs, is composed in five short movements, using mixed and changing meter, tonal harmonies and with rather accessible technical demands.

The detailed instrumentation is
2 flutes (2 piccolos) 2 Oboes, 2 Clarinets, 2 bassoons (also contrabassoon), 2 horns, 1 cornet (or trumpet), 1 trombone, 1 tuba.
It has a duration of around 6 minutes, and it is edited by Schott.

Bernd Alois Zimmermann is perhaps best known for his opera “Die Soldaten”, which is regarded as one of the most important German operas of the 20th century, after those of Alban Berg.
Zimmermann began writing works in the neoclassical style, continued with free atonality and twelve-tone music. He also had a great affection for jazz and for combinations of overlapping layers of musical material from various time periods (Ancient music, Baroque, Classical and Pop) building pieces entirely as a collage, as is the case of another Wind Band work for ambitious ensembles, the ballet “Musique pour les soupers du Roi Ubu”.