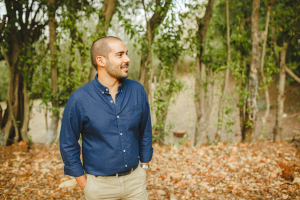 Porto de Saudades by Portuguese composer Nelson Jesus is our Composition of the Week.
Porto de Saudades was written in 2015 and has duration of 16 minutes. It uses a standard symphonic band setting, including double bass, piano and five percussion parts.

“The work is built as a rhapsodic suite in the style of the great band composers from the early XX century (also nationalists and proud of their folk music), this piece has nine shorts, connected parts in a free form, juxtaposing the popular themes with original ones, the folk flavours versus abstract chamber music, orchestral and solo parts. Like a symphonic poem, it describes some situations and quotations of Oporto. Here the word Porto refers both to the city and to the harbour, literally a sheltered place.” (Program notes from the publisher)

Porto de Saudades has received the 2nd prize at the 4th Composition Contest of the Banda Portuguesa de Musica, in 2016.

Jesus has earned several awards and honors, such as the 3rd prize of the junior category at the 1st International Sax Contest in Palmela, 2005; honorable mention in the Interpretation contest of Caldas da Rainha Mus & Caldas 2005 and 2006; 1st prize Oporto Conservatory Music Competition, 2007 edition; and 1st prize of the 3rd Music Competition Anatólio Falé, City of Lagos. He also won the 1st Prize in Composition for Symphonic Band Ibermúsicas Oaxaca-2014, 2nd Prize in Composition at the IV Banda Sinfonica Portuguesa National Composition Competition 2015, and 1st Prize at the 4th Edition of Portuguese Army Band-Inatel composition Competition, 2016. Nelson Jesus was also the winner of the 1st WASBE Composition Contest with his educational piece Wolf Tears.

Currently he is a sax player in National Guard Symphonic Band and has private classes with the composer Fernando Altube from Argentina.

Other works for winds by Jesus include: