POINT OF TRANQUILITY (Idyll for Winds, Brass and Percussion) by Kenneth Fuchs (USA, 1956) 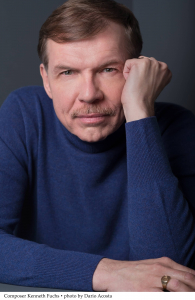 Point of Tranquility by American composer Kenneth Fuchs is our Composition of the Week.
This idyll for winds, brass and percussion is inspired by the painting of the same name by abstract artist Morris Louis.
Point of Tranquility was written in 2017 and has duration of 11 minutes.
“The coloristic freedom and shape” suggested by the painting were the inspiration from which Fuchs has developed his work.

Kenneth Fuchs serves as Professor of Composition at the University of Connecticut. He received his Bachelor of Music degree in composition from the University of Miami (cum laude) and his Master of Music and Doctor of Musical Arts degrees from the Juilliard School in New York City. His teachers include Milton Babbitt, David Del Tredici, David Diamond, Vincent Persichetti, Alfred Reed, and Stanley Wolfe.
Dr. Fuchs has composed music for orchestra, band, chorus, and various chamber ensembles. With Pulitzer Prize-winning playwright Lanford Wilson, he created three chamber musicals, The Great Nebula in Orion, A Betrothal, and Brontosaurus, originally presented by Circle Repertory Company in New York City. His music has been performed in the United States, Europe, China, and Japan.

Other works for Wind Ensemble include

Kenneth Fuchs about on his music for wind ensemble:
http://www.kennethfuchs.com/video-uscg-band.htm