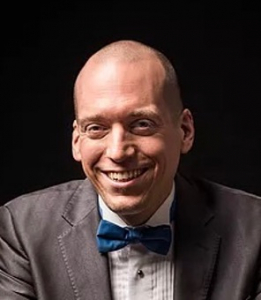 “Mouvement frénétique” by Canadian composer Jonathan Dagenais is our Composition of the Week.
Written in 2018 for the 30th anniversary of the Fennette Wind Band from Saint-Jerôme High School, Mouvement Frénétique is a 5 minutes, dynamic and frenetic rhythmic work.
It is based on a simple motif of four notes that are repeated, varied and developed throughout the movement. Composed in a minimalist musical aesthetic, the subtle use of rhythmic percussion, mixtures of orchestral colors and the Lydian mode add complexity and energy to the piece.

Jonathan Dagenais holds a master’s degree in conducting from McGill University and a Bachelor’s degree in composition from the University of Montreal.
His works, which have been performed repeatedly by numerous Canadian university and high school ensembles, also appear on several professional recordings. His compositions are included in many North American concert band music festival syllabuses and are currently published worldwide by Alfred Music, Hafabra Music and Eighth Note Publications.
Jonathan Dagenais is also a conductor and adjudicator. He has been invited to adjudicate and to give clinics at more than 25 North American music competitions and festivals.
He currently serves as an Instrumental Conducting teacher at McGill University (Schulich School of Music) as well as a composition teacher at Sherbrooke University.