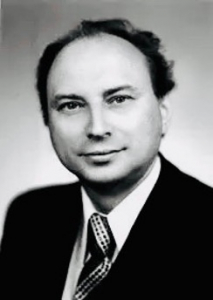 Moravian Rhapsody, by Czech composer, conductor and teacher Evžen Zámečník is our Composition of the Week.
Moravian Rhapsody was performed on July 23, 2022, at the Žofín Palace, Prague, Czech Republic, during the 19th International WASBE Conference, by the WASBE Youth Wind Orchestra, conducted by Marek Prášil.
It is a short, brilliant work inspired by folk melodies from Moravia. After a brief brass fanfare, the rhapsody unfolds in a series of variations on the song Beskyde Beskyde, which dominates the whole work.
Moravian Rhapsody was written in 1984, after a commission from the Uster Festival in Switzerland, where it received its premiere performance in 1985.
It is scored for standard wind band and has a duration of 7’30 minutes.

Evžen Zámečník studied violin and composition at the Brno Conservatory and then at the Janacek Music Academy with Jan Kapr. He graduated in 1968 with a degree in composition.
A scholarship enabled him to study for two years in the composition class of Günter Bialas at the Staatliche Hochschule für Musik in Munich. He completed his studies at the Academy of Music in Prague with Jiri Dvoracek.

He was a violinist for many years with the Janacek Opera Orchestra and the Brno State Philharmonic Orchestra. Following that, he served as a dramaturg for five years at the Janacek Opera House.
Zámečník conducted the Brno Brass Ensemble from 1982 until his death. In 1994, he was named director of the Brno Conservatory of Music, a post he held until 2002, where he did much to build up the wind orchestra curriculum. Zámečník was an energetic organizer of activities in the field of wind and brass music and was the Czech delegate in the international organization CISM.

He was a successful, prize-winning composer of chamber music, orchestral and stage works. During the nineties he became worldwide known for his many brass band compositions and arrangements of different styles. He regularly composed for wind ensembles and brass. Zámečník’s unique style is notable for its exceptional expression as well as for its specific sense of humor and wit, initially with a tendency towards neoclassicism, but integrating later increasingly contemporary composition techniques. His dominant line remained simple, and of spontaneous tonal language. His later works showed clearly his interest in wind instruments and percussion.
In acknowledgement of his merits in the field of orchestral music, Zámečník’s piece Babi Hura was performed to critical acclaim at the Prague Premieres (a review of selected contemporary works) in 2005. This orchestral composition was written to mark the 150th anniversary of Leos Janacek’s birth. For its jubilee 110th season, the Czech Philharmonic commissioned a new work from him, Concerto giocoso, which was performed at the gala anniversary concert in the Dvorak Hall at Rudolphinum, on January 4, 2006.

Other works for winds include