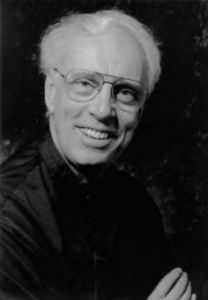 Monumentum pro umbris by Canadian American composer Sydney Hodkinson is our Composition of the Week.
Sydney Hodkinson passed away on January 10, 2021. WASBE would like to honor his memory with this work.
Monumentum pro umbris was written for the Eastman Wind Ensemble (with whom Hodkinson had a close relationship, both as a performer and conductor), and Mark Scatterday, on the occasion of his appointment in July 2002.
A couple of years later, Hodkinson’s work was awarded the 2004 Audience Prize and second place from the International Harmonie Composition Contest of Harelbeke, Belgium.
Monumentum pro umbris (Memorial for the Departed Spirits) is approximately 20 minutes long and is scored for full winds, brass, a large percussion section, with harp and piano.

“Monumentum pro umbris” took shape very gradually as a personal reflection on our earth’s last decade of wars and large-scale human suffering. The contemplation of great pain and horrendous loss of life leaves one totally benumbed. On at least three other occasions, I have resorted to the medium of large, massed winds and percussion to give vent to similar concerns. Accordingly, much of this music has a dark meditative, “processional” aspect, perhaps evoking a somewhat Byzantine religious ritual. The muted chorales (in the horns, and later intoned by the clarinets), implacable percussion, and extensive use of repetition (both of a brass 6-note motto and ascending woodwind figuration) all conspire to convey the work’s sombre attitude. All of the sonic material – often obsessively – is generated from a brief fragment of Claudio Monteverdi’s 1608 Lamento d’Arianna: “Lasciate mi morire” (O, let me now die!). The Renaissance master’s quotation is only heard – very distinctly – near the close of the piece. The score is dedicated to the loving memory of two American composers: Earle Brown (1926-2002) and Ralph Shapey (1921-2002), both of whom took the time and patience – in the late 1950s – to serve as mentor for a very young Canadian beginner. I am eternally grateful for their generosity […]
[The score] was conceived in Aspen, Colorado and Bloomington, Indiana, during teaching stints there, and the scoring was completed on August 30, 2002, in Ormond-by-the-Sea, Florida.”  (Program notes by composer).