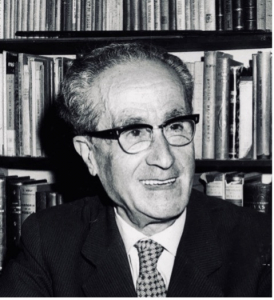 Marxa Burlesca, by Spanish composer and teacher Manuel Palau Boix is our Composition of the Week.
Marxa Burlesca was performed on July 23, 2022, at the Žofín Palace, Prague, Czech Republic, during the 19th International WASBE Conference, by the Filarmónica Beethoven (Spain), conducted by Juan José Fernández Olivares.
Manuel Palau Boix wrote a first version for saxophone ensemble in 1936, possibly out of sketches for piano. This first version was premiered on December 23, 1936, at the Principal Theatre of Valencia, by the Orquesta Filharmonía de Saxos, presumably under the composer himself.
Immediately after the premiere, Palau Boix would score the march for symphony orchestra, symphonic band as well as for instrumental ensemble.
The version for symphony orchestra was also premiered at the Principal Theatre of Valencia on March 28, 1937. There are no records of the band version’s premiere.

Marxa Burlesca has a duration of 7 minutes and has become a cornerstone of the Spanish wind band literature of the beginning of the 20th century. It has received ever since countless performances in Spain.

Although, Palau Boix’s music is lesser-known abroad, even though he looked into the French musical mirror, where he found some of his more important musical influences. The artistic currents that coexisted at the beginning of the 20th century influenced his music to a greater or lesser degree. One of the greatest influences, that marked his music in a remarkable way, was to be Valencian folklore, at a time in which Andalusian regionalism was dominant, the maestro sought inspiration in his own cultural roots.

Manuel Palau was a teacher at the Valencia Conservatory. He wrote a large number of works. He was one of the most popular and important composers of his time. He received the Spanish National Music Award (Premio Nacional de Música) twice, first in 1927 and again in 1945. His music is known within the Spanish classical music for being a representative of what it has been called “Mediterranean” style, like other Spanish musicians such as Vicente Asencio or Oscar Esplá.
The cities of Valencia, Alfara del Patriarca, Llíria, Alaquàs and Xirivella named streets after him. There is also a Spanish choir called Manuel Palau in his honor.

Other works for band include: