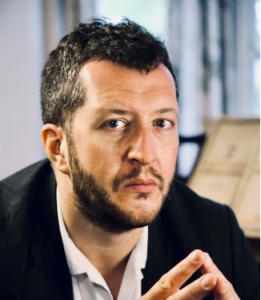 Living Toys by British composer, pianist and conductor Thomas Adès (London, 1971) is our Composition of the Week.

Written in 1993, at Adès composition career’s beginnings, Living Toy uses a chamber ensemble of 14 players. The work was commissioned by the Arts Council of Great Britain for the London Sinfonietta. The premiere took place at the Barbican Hall, London, on February 11, 1994, under the celebrated composer and conductor Oliver Knussen.

Living Toy is divided into five uninterrupted sections and has a duration of around 17 minutes. Its detailed instrumentation is:

Thomas Adès works regularly with the world’s leading orchestras, opera companies and festivals, as a guest composer and conductor. He also pursues his career as a concert pianist and collaborates with many established soloists around the world.

His compositions include orchestral music, chamber music as well as three operas: the most recent of which The Exterminating Angel premiered at the 2016 Salzburg Festival and subsequently has been performed at the Metropolitan Opera, New York and the Royal Opera House, London all conducted by the composer.