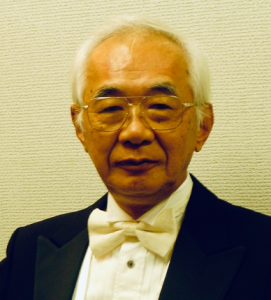 Koshi – An Ancient Festival, by Japanese composer Hiroshi Hoshina is our Composition of the Week.

Originally composed for orchestra under the title “A Festival” in 1978 honoring a commission from the Okayama University Symphony Orchestra for its 25th regular concert season.

Later on, in 1980, Hoshina transcribed the piece for band upon a request of the Yamaha Symphonic Band, to celebrate the Band’s 20th anniversary.

The premiere took place on June 29, 1980, in Hamamatsu. The Tokyo Kosei Wind Orchestra recorded the piece right after its premiere under Kazuyoshi Akiyama.

Koshi – An Ancient Festival would be recorded again in 1999 by the Osaka Municipal Symphonic Band, and for that occasion, Hoshina revised the score one more time, “taking into account of recent progress of performance technique”.

“As the title shows, (Koshi) is the image of an ancient festival transformed into musical form. It begins with a solemn prayer scene, moving to a fanatic dance which then gives way to an amorous dance of women, and the ceremony is in full swing. The women exit and the dance recommences, increases in intensity and rushes to a climax. The people, fatigued from the dance, offer the last prayer and the ceremony ends peacefully.” Composer’s program notes.

Koshi – An Ancient Festival has a duration of about 14 minutes.

It is written for standard Symphonic Band instrumentation, including Harp. If a Contrabass Clarinet is available, it should double the String Bass part.

With a difficulty ranging between grades 4 and 5, and due to the use of old church modes and relatively simple chords, the work is rather easy to understand. Although it is rhythmically challenging, especially during the dance section.

Koshi – An Ancient Festival is available on rental at Hoshina Music.

Hiroshi Hoshina was born in 1936 in Tokyo. After studying in Ryogoku High School, he studied Composition at the Tokyo University of Fine Arts with Yoshio Hasegawa and Conducting with Akeo Watanabe.

After graduation in 1960, he started a successful career as a composer and conductor.

His wide range of compositions include works for orchestra, chamber ensembles, choral and wind music.