Jacob de Haan, one of the most performed composers in the world of wind music, has won the Buma Wind Music Award this year. Buma, the Musical Rights Society in the Netherlands, has awarded this prestigious prize to the Dutch composer who has made an important contribution to the development of wind music in the Netherlands and abroad. The award for the foreign composer goes to Oscar Navarro. On Sunday, December 15, both prizes will be awarded during a repertoire festival in the city of Ede. On the occasion of this, his new work Hora Est is performed by the National Youth Fanfare Orchestra. Earlier this year, Jacob de Haan was already winner of the Buma Classical Award. “It is a great year for me, two Awards in 1 year feels like a great appreciation for my music”, says Jacob de Haan who has just returned from a trip to Brazil, where he conducted the Banda Sinfônica do Guri Santa Marcelina in Saõ Paulo. 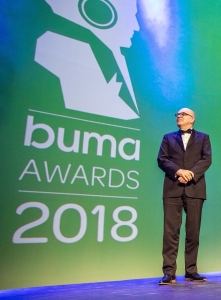