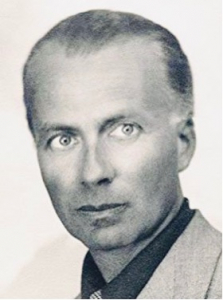 “I Presagi” (The Omens) by Italian composer Giacinto Scelsi is our Composition of the Week.

I presagi was written in 1958, one year before the famous Quattro Pezzi su una nota sola (Four Pieces on a single note) for Chamber Orchestra.
Without proceeding drastically to a reduction of the musical material, I presagi gives us a glimpse of what would become Scelsi’s style: “entering the sound” by altering it in all manners through microtonal oscillations (here by means of a quarter of a tone), changing the timbre and dynamics, using vibrato, tremolo, trills, and extended techniques to make it tremble in all possible ways.
I presagi was premiered almost thirty years after its creation, on May 28, 1987, during the Festival Voix Nouvelles, at the French Abbey of Royaumont, by the Nuovo Ensemble Italiano, under Aldo Brizzi.
Its detailed instrumentation is:

I presagi has a duration of 10 minutes and it is published by Editions Salabert.

Giacinto Scelsi was not only a composer but also a surrealist poet, writing exclusively in French. His musical output, which encompassed all Western classical genres except scenic music, remained largely undiscovered even within contemporary musical circles during most of his life.

Scelsi collaborated with American composers including John Cage, Morton Feldman, and Earle Brown, as well as being a friend and a mentor to Alvin Curran. His work was a source of inspiration to Ennio Morricone’s Gruppo di Improvvisazione di Nuova Consonanza, and his music influenced French composers like Tristan Murail, Gérard Grisey and Michaël Lévinas.

Although, he remained largely unknown for most of his career. A series of concerts in the mid to late 1980s finally premiered many of his pieces to great acclaim, notably his orchestral masterpieces in October 1987, in Cologne, about a quarter of a century after those works had been composed and less than a year before the composer’s death.
Scelsi was able to attend the premieres and personally supervised the rehearsals.