GRAN DUO for Woodwind and Brass by Magnus Lindberg (Finland) 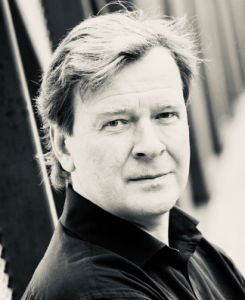 GRAN DUO
For Woodwind and Brass

Finnish composer Magnus Lindberg’s Gran Duo is our Composition of the Week.

Gran Duo was written between 1999 and 2000 for orchestral winds. The detailed instrumentation setting calls for:

Gran Duo was premiered on March 8, 2000, at the London Royal Festival Hall, by the Birmingham Symphony under Simon Rattle.

The text alternates chamber music moments with a dialogue between the two massed forces composing the duo, the Woodwinds and the Brass. With a duration of 20 minutes and a considerably high difficulty, Gran Duo is published by Boosey and Hawkes.

Magnus Lindberg (1958) is one of the internationally best-known Finnish composers of today. He is predominantly a composer of instrumental music, above all orchestral music. His musical language is usually highly complex yet highly full of vim and verve. Lindberg is both rationalist and pragmatist, a hands-on musician – a pianist – who participated in many premieres in the early stages of his career and founded the experimental Toimii Ensemble.

Lindberg studied composition at the Sibelius Academy with Einojuhani Rautavaara and Paavo Heininen (graduated 1981). The latter encouraged his pupils to look beyond the prevailing Finnish conservative and nationalist aesthetics, and to explore the works of the European avant-garde. This led around 1980 to the founding of the informal grouping known as the ‘Ears Open Society’ including Lindberg and his contemporaries Hämeeniemi, Kaipainen, Saariaho and Salonen, which aimed to encourage a greater awareness of mainstream modernism. Lindberg made a decisive move in 1981, travelling to Paris for studies with Gérard Grisey, the developer of spectral music, and Vinko Globokar, whose interests lay in the social functions of performing and in improvisation in contemporary music. The IRCAM and the impressive figure of Pierre Boulez contributed significantly to Lindberg’s mental landscape. During this time he also attended Donatoni’s classes in Siena, and made contact with Ferneyhough, Lachenmann and Höller. and later in composition masterclasses with Franco Donatoni, Helmut Lachenmann and Brian Ferneyhough.

Among the many prizes, he and his music have won are the UNESCO Rostrum in 1982 for …de Tartuffe, je crois and in 1986 for KRAFT, the Prix Italia 1986, the Nordic Music Prize 1988 for KRAFT, the Royal Philharmonic Society Prize for large-scale composition in 1992 and the Wihuri Sibelius Prize 2003. (Presentation by Ondine Records).