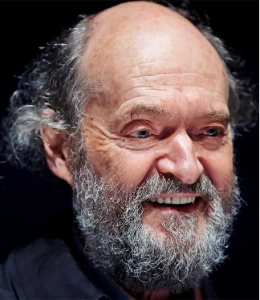 To continue with our series of chamber music works suitable for programs with reduced forces, we would like to feature two octets for winds by Estonian composer Arvo Pärt as Compositions of the Week.

“The highest virtue of music, for me, lies outside of its mere sound. The particular timbre of an instrument is part of the music, but it is not the most important element. If it were, I would be surrendering to the essence of the music. Music must exist of itself … two, three notes … the essence must be there, independent of the instruments.” Arvo Pärt

Fratres (for Wind Octet and Percussion)

Arbos (for 4 trumpets, 4 trombones and percussion)

Fratres (Brothers) exemplifies Pärt’s tintinnabuli style. Or his search for simplicity and pureness. “Like the three notes of a triad, which are like bells”

Fratres is originally three-part music, written in 1977 without fixed instrumentation, allowing for instance, different settings because the music is not bond to a specific timbre.

The first version led to the creation of a total of 17 versions for different types of ensembles, which are grouped in two families: 7 versions follow the original three-part music, the other ten versions have solo variations.

The Wind Octet and Percussion version was prepared in 1990 by Beat Briner for Universal Music. It has a duration of 10 minutes as all the others, and the detailed instrumentation calls for
02(eh)2(BCl)2/2000.Perc(1)

On the other hand, Arbos is written in a single, short a unique movement without any particular development or modulation. Its performance time is only 2’30 minutes. The work was written in 1977 and revised in 1986. It uses the same compositional approach as Fratres, which would become later on in Pärt’s career his distinctive signature. Arbos is dedicated to the Estonian violinist and conductor Andres Mustonen.