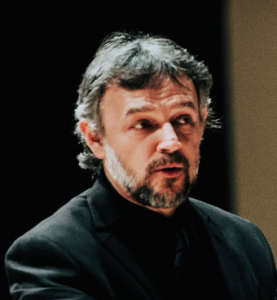 El Solitario, by Colombian composer Rubén Dario Gómez Prada is our Composition of the Week.

Written in 2019 and premiered on March 21, 2020, at the University of Nebraska Lincoln, El Solitario is the latest work for winds by Gomez Prada. It has a duration of 15 minutes and uses a standard wind ensemble instrumentation as well as piano and a large percussion section.

“El Solitario, is inspired in the life of José María Acevedo y Gómez, also known as “El Solitario”, who was one of the most controversial figures that the region of Santander (Colombia) has ever known. Acevedo y Gómez lived from 1871 to 1945 primarily in the small city of San Gil, Colombia, but also in countries such as Spain, France and the United States. This brilliant, wealthy, and extravagant man faced problems of all kinds, including multiple-personality issues, various attempts to commit suicide, and a long conflict with his brother who always wanted to take control over his fortune. Other eccentricities included his own comparison with Don Quixote and his self-proclamation as a Count.

The Tone Poem is primarily built on two themes: The “solitude” theme and the “craziness” theme. The former is presented by the English Horn, and repeated various times during the piece in a variety of ways, sometimes in quiet textures, reflecting solitude, depression, and hopelessness. Some other times it is presented in an optimistic and triumphant manner, reflecting Acevedo y Gomez’s entrepreneurial talents as well as his ability to recover from the most unfortunate situations. The craziness theme is presented initially by a trombone solo and it is developed in a variety of ways including the use of mix-meter changes, aleatoric writing, dense orchestrations and atonal languages.” Program Notes by the Composer

Rubén Dario Gómez Prada was born in 1973. He has earned a Master of Music from Middle Tennessee State University and he has just completed his DMA at the University of Nebraska Lincoln in May 2020, under Dr. Carolyn Barber (conducting) and Dr. Gregory Simon (composition).

Gómez Prada has an active career as music producer and arranger for several popular groups in his home country as well as a successful career as a composer, conductor, adjudicator and teacher. His music has been performed in Colombia, the USA, Spain, Germany, Argentina, Brazil and Venezuela.