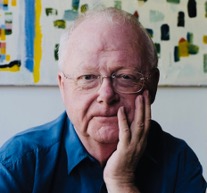 DE VORHALDING
For Piano and Winds (1972)

Dutch composer, pianist, and academic teacher Louis Andriessen passed away on July 1, 2021, in Weesp, The Netherlands at age 82. He was considered the most influential Dutch composer of his generation.

De Volharding (Perseverance) was written in 1972 for an ensemble composed of 3 saxophones, 3 trumpets, 3 trombones, and a piano part played by the composer and founder of the group. This piece would also become the name of the ensemble.
The audience takes part in the live performance presented here in a most interesting way, it was revolutionary both artistically and politically as illustrated by the composer himself on the following statement:

“With the piece de Volharding I set out to break down a few musical barriers. That was also the intention of the so-called Inclusive Concerts that were organized in Amsterdam in the early 1970s. These were free concerts lasting 8 or 9 hours in which all sorts of music were performed: avant-garde, medieval music, pop, jazz, electronic music, and so forth. With this formula, we hoped to break through the exclusivity of the various concert genres and their audiences. While working on de Volharding, I was already aware that the ‘democratizing’ of music was not just about organizing concerts, but also about the music itself. The work de Volharding thus has just as much to do with avant-garde music as with folk music elements, like persistent rhythms and a freer interpretation by the performer. That comes from the fact that the work’s content, as well as the way in which the piece is performed, is ultimately influenced by the players themselves.”

Louis Andriessen was born in Utrecht on June 6, 1939. After early training in composition with his father, composer Hendrik Andriessen, he continued his studies with Kees van Baaren at the Royal Conservatory of The Hague. Receiving the major composition prize upon his graduation, Andriessen subsequently studied two years with Luciano Berio in Milan (1962-63) and Berlin (1964-65).
Returning to Holland, he established himself as a leading musical figure through his compositions and as a performer of his own and others’ work. Since 1978 he has held a teaching appointment in composition at the Royal Conservatory. He also taught at the Californian Institute of Arts (Los Angeles), Princeton University and the Katholieke Universiteit Nijmegen. In 1987 he lectured on musical theory and composition in the USA at Yale University.

In 1994 he was the artistic director of the Meltdown Festival at South Bank Centre in London. In 2004 he was appointed professor at the Art Faculty of the University of Leiden. His archives are filed by the Paul Sacher Stiftung (Switzerland) in 2007.

With the composition, in 1972, of De Volharding, he founded and launched a wind ensemble by that name for which he wrote a second piece, On Jimmy Yancey (1972). In 1977, Hoketus similarly resulted in a like-named permanent ensemble to which Andriessen was himself attached as a pianist.

Other works for winds by Louis Andriessen include

In 2001 he was awarded by the World Music Contest Kerkrade for his contributions to wind music.
Other awards include UNESCO International Rostrum of Composers; Vermeulen Award (1977), Honorary Doctorate Birmingham City University (2010); Grawemeyer Award (2011); Honorary Doctorate from University of Amsterdam