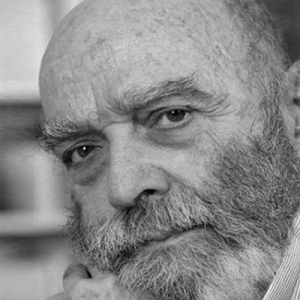 In memoriam Luis de Pablo, Spanish composer, after his passing on October 10, 2021, at 91 years of age.
We would like to honor his memory by presenting two chamber music works for winds as our Compositions of the Week.

Luis de Pablo studied law at the Complutense University of Madrid, from which he graduated in 1952. At the same time, he had always studied music, showing an interest in the most modern forms of art. Luis de Pablo, already a lawyer for the airline company Iberia, began to complete his training with an intensely personal study of the main scores of the 20th century, while trying out his own works, as a self-taught composer.

At the end of the 1950s, he gave up law and began to present his works. In 1958 he founded the group Nueva Música with Ramón Barcé, in which Cristóbal Halffter also participated.

In the 1960s, while continuing to compose, he developed an intense activity for the promotion of modern music in his country: lecturer, analyst (especially of Webern’s works), he translated Stuckenschmidt’s biography of Schoenberg and of Webern’s main writings, unpublished in Spain at the time. Editor, founder of the “Tiempo y Música” concerts in 1959 (where “Le Marteau sans Maître” and the three piano sonatas by Boulez were premiered in Spain, as well as “Zeitmass” by Stockhausen) and of the “Alea” group in 1965, the first Spanish electroacoustic studio. He also organized the “Jeunesses Musicales concerts” from 1960 to 1963 and a contemporary music biennial from 1964.

Through this activity and his works, Luis de Pablo brought Spain out of the cultural isolation in which Francoism had plunged it. He introduced serialism in a country where music had stopped since the Civil War at the folk aesthetics of Pedrell or Falla, and succeeded in imposing young Spanish music on the international scene: Darmstadt, Donaueschingen and Paris.
He himself went to Darmstadt at the beginning of the 1960s, where he met Bruno Maderna, Pierre Boulez, György Ligeti, Karlheinz Stockhausen, and then went to Paris to study with Max Deutsch, a former student of Schoenberg. Luis de Pablo’s music reflects the tendencies of a whole generation that tries to renew serialism through the means of aleatoric elements.

In 1972, he organized the “Encuentros de Pamplona”, a festival of music, theater, cinema and visual arts, the apotheosis of his activity as a defender of new art in Spain. But it was a difficult personal experience since he was accused by Franco’s regime of giving too much importance to “left-wing art”, and by ETA of being a supporter of the regime (one of the patrons of this festival was kidnapped by ETA, and the event was stopped because of bomb attacks). Luis de Pablo was forced into exile, first in the United States (he taught at the University of Buffalo), then in Canada (professor at the University of Ottawa and the University of Montreal). Returning to Madrid after Franco’s death.

He received many awards, such as the Officer of the Order of Arts and Letters (France, 1986), “Doctor Honoris Causa” of the University of Madrid (1977), National Music Prize (1991), Honegger “Prize of Foundation of France” (2003), Prize for Musical Composition of the Prince Pierre de Monaco Foundation, Prize of the Jacinto Guerrero Foundation (2004), among others.