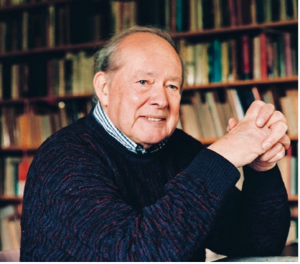 Concerto No. 1 Op. 19, for Piano, Wind and Percussion by Welsh composer Alun Hoddinott is our Composition of the Week.
Concerto No. 1 was written in 1959, it has a duration of about 20 minutes, it is scored for orchestral winds and percussion.

“Alun Hoddinott was born in Bargoed on 11 August 1929, the son of a schoolteacher, Thomas Ivor Hoddinott, and his wife Gertrude (née Jones). The family moved to Gorseinon and he received his education at Gowerton Grammar School, which boasted a strong musical tradition. He began the violin at a young age and was one of the first members of the National Youth Orchestra of Wales, formed in 1946. In the same year he gained a scholarship to the University College in Cardiff, and during his time there took private lessons in composition with Arthur Benjamin in London. He graduated B.Mus. (Wales) in 1949 and in 1951 was appointed to the then Cardiff College of Music and Drama. In 1953 he won the Walford Davies Prize for composition and in 1957 the Medal of the Arnold Bax Society. He was appointed to a lectureship at his old college in Cardiff in 1959 and gained the D.Mus. (Wales) the following year. He was promoted Reader in 1963 and Professor in 1967. He founded the Cardiff Festival of 20th century music and attracted prominent composers such as Benjamin Britten and Olivier Messiaen to take part. He retired from his university chair in 1987, and from the festival in 1989, to concentrate on composition.

He came to general notice and was acknowledged as a very promising composer in 1954 when his Concerto for clarinet (op.3) was performed at the Cheltenham Music Festival by the celebrated clarinetist Gervase de Peyer and the Hallé Orchestra under John Barbirolli. Although this neo-classical work has remained in the repertoire, Hoddinott subsequently developed a more intricate and personal style, with an emphasis on chromatic shades and complex rhythms. And though acknowledging the influence of the serialists he did not abandon tonality. He composed in a number of forms, producing ten symphonies and orchestral works notable for their color, and inspired by poetic imagery, including The sun, the great luminary of the universe (1970). He also enjoyed success as a composer of operas, such as The Beach of Falesá, The Trumpet Major, and What the old man does is always right. He was proud to be called a Welsh composer, and drew on Welsh authors for material, but there is no influence of folk music on his idiom, and the strongest musical influence on him was probably the Italian tradition.

He was awarded a C.B.E. in 1981, and the Glyndwr award for outstanding contribution to the arts in Wales in 1997. He married, 2 April 1953, Rhiannon Huws, daughter of the Rev. Llewellyn Caradog Huws, Gwauncaegurwen, and they had one son, Ceri. He died in Swansea on 11 March 2008. The new hall of the BBC National Orchestra of Wales in the Millennium Centre in Cardiff was named Hoddinott Hall in recognition of his contribution to music in Wales.” (Text by Rhidian Griffiths)

Other works for Winds by Alun Hoddinott include: