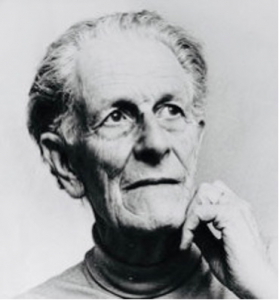 Scored for Piccolo, flute, 2 clarinets, 2 bassoons, Alto Sax, 2 horns, 2 trumpets, 2 trombones, timpani, percussion and Honky-tonk piano, the work was written in 1924.
It is cast in two movements, 1. “Entr’act” and II. “Mouvement de blues”, both of joyful character and with influences from European jazz of the beginning of the century.
It has a duration of 12 minutes.
The concerto was edited by Bastiaan Blomhert and was premiered in this edition at Carnegie Hall New York in 2005, by the Murray State University Orchestra under Dennis Johnson.

A contemporary of Arthur Honegger, Frank Martin occupied a place in Swiss musical life similar to that of his compatriot, but which is not yet recognized.
The son of a Protestant pastor, he was born in Geneva and initially studied mathematics. He did not turn to music until the age of twenty. At the Geneva Conservatory, he worked with J. Lauber and Émile Jaques-Dalcroze. During various trips, he discovered the great aesthetic currents of the twenties, particularly impressionism. In Paris, he deepened his rhythmic research by studying the music of antiquity and the Far East. Back in Switzerland, he was appointed professor of improvisation and rhythm at the Jaques-Dalcroze Institute in Geneva (1928-1939), then professor of composition at the Modern Technicum and the Geneva Conservatory. He was president of the Association of Swiss Musicians (1942-1946) and then moved to Naarden in the Netherlands. From 1950 to 1957 he taught at the Hochschule für Musik in Cologne.

His music reflects most of the dominant trends since the beginning of the 20th century. After adopting the Wagnerian heritage, he reacts with passion by choosing a classical writing tinged with impressionism. Jaques-Dalcroze’s rhythmic research found an important echo in his production. The classicism of the twenties quickly turned to dissonance, and he adopted serial writing to which he gave a human warmth that brought him back to tonality at the end of his life. In parallel to this aesthetic research, Frank Martin was subjected to various apparently opposite cultural influences which allow, to a large extent, to understand his aesthetic path.
His work, very abundant, touches all the genres. From his “classical” style, we can retain the Quintet for piano and strings (1920) and the Four Sonnets to Cassandra (1921). With Rythmes (1926), a symphonic score, he moved towards serialism, which was to be marked by the Sonata for violin and piano (1931), the Piano Concerto No. 1 (1934) and above all his first stage work, La Nique à Satan (1931), a popular show that was a great success.

Frank Martin’s major scores are after 1938, when he found a truly personal language. His greatest successes are oratorios: Le Vin herbé (1938-1941) after Joseph Bédier’s Tristan et Yseult, reveals him to the musical world; In terra pax (1944), Golgotha (1948), Le Mystère de la nativité (1959), Pilate (1964) and his Requiem (1971) are powerful and profound works that dominate the religiously inspired production of our time. In the field of melody, Le Cornette, on poems by Rilke and the Six Monologues de Jedermann on poems by Hofmannsthal (1943) are noteworthy. His three main lyrical works illustrate the different faces of his temperament: The Tempest after Shakespeare (Vienna, 1956), The Mystery of the Nativity (brought to the stage in Salzburg in 1960) and Monsieur de Pourceaugnac (Geneva, 1963).

His symphonic output is dominated by the Passacaglia (1944), the Petite Symphonie concertante (1945), which was performed around the world, and the Concerto for seven wind instruments, strings and timpani (1949). He also composed concertos for violin (1951), harpsichord (1952), cello (1956), piano (No. 2, 1969), as well as an original work for soprano, violin and orchestra, Maria Triptychon (1968), and a series of Ballads for various instruments that are part of his output. During the last years of his life, he wrote mainly for small ensembles: String Quartet (1967), Polyptych for violin and strings (1973), dedicated to Yehudi Menuhin. At the end of a long road, the man and the composer seem to have come together in a simplicity that is sometimes austere, but of a rare depth.

Other works for winds by Frank Martin include