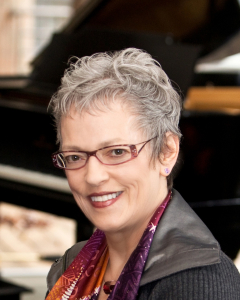 Circuits, by American composer and educator Cindy McTee is our Composition of the Week.

Circuits was originally written in 1990 for the Denton Chamber Orchestra of Denton, Texas. Shortly thereafter, in 1991, McTee created a version for wind ensemble.
Although, in 2011, she bought back the copyrights to Circuits and, following extensive editing, created a newly revised version. … The inclusion of jazz elements and the playful manipulation of musical materials using syncopation, sudden transposition, and juxtaposition are also characteristic of the work.

“The title, Circuits, is meant to characterize several important aspects of the work’s musical language: a strong reliance upon circuitous structures such as ostinatos; the use of a formal design incorporating numerous, recurring short sections; and the presence of an unrelenting, kinetic energy achieved through the use of 16th notes at a constant tempo of 152 beats per minute.” (Program note by composer)

Circuits has a duration of about 6 minutes. It is scored for standard wind ensemble. The work is dedicated to Ray Cramer and it is available at Bill Holab Music.

Cindy McTee holds degrees from Pacific Lutheran University, the Yale School of Music, and the University of Iowa. She also completed one year of study in Poland with Krzysztof Penderecki at the Academy of Music in Kracow.
Originally hailed by critics as a composer whose music reflects a “charging, churning celebration of the musical and cultural energy of modern-day America”, Cindy McTee “brings to the world of concert music a fresh and imaginative voice”. She has received numerous awards for her music, most significantly a “Creative Connections Award” from Meet the Composer, two awards from the American Academy of Arts and Letters, a Guggenheim Fellowship, a Fulbright Fellowship, and a Composers Fellowship from the National Endowment for the Arts. She was also the winner of the 2001 Louisville Orchestra Composition Competition, and in 2002 was selected to participate with the National Symphony Orchestra in “Music Alive.” a residency program sponsored by Meet the Composer and the American Symphony Orchestra League.

Other works for winds by McTee include