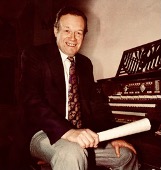 Ciacona in E minor on an Old Bohemian Chorale, by Czech composer and musicologist Zdeněk Jonák, is our Composition of the Week.
Ciacona in E minor was performed as a concert opener on July 22, 2022, at the Žofín Palace, Prague, Czech Republic, during the 19th International WASBE Conference, by the Sinfonisches Blasorchester Bern, conducted by Rolf Schumacher.
Jonák’s work was premiered in 1993, during the Internationale Festliche Musiktage Uster, in Switzerland, by the Royal Northern College of Music from Manchester, conducted by Clark Rundell.
It has a duration of about 8 minutes, and it is scored for standard wind band setting.

Ciacona in E minor “is subtitled Ein Altböhmischer Choral (An Old Bohemian Chorale), uses the ancient Hussite war hymn Ye Warriors of God as the chaconne melody. This is the same theme used by Karel Husa in his Music for Prague 1968, and by Smetana in his opus magnum Ma Vlast. The chaconne theme is stated at the outset of the piece in the trombones and remains evident almost continuously throughout the work.” (Program notes from Sinfonisches Blasorchester Bern)

Jonák received his master and doctorate degrees from the Prague Conservatory.
Furthermore, he had a Ph.D. in psychology, and he also has a degree in philosophy.
In 1965 he became music director of Radio Prague. In 1972 he became head of the music department in the Prague broadcasting professions. He remained in this position until his retirement.

Dr. Jonák made many arrangements of folk songs.  He also composed music for orchestra, chamber groups, chorus, and films. For a long time, he was one of the best-known contemporary Czech composers abroad.