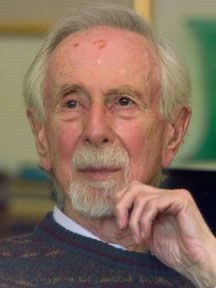 Black Sounds, by American composer George Rochberg is our Composition of the Week.
Black Sounds was commissioned by the Lincoln Center Foundation and dedicated to Anna Sokolov. The music is scored for five woodwinds, seven brass, piano, celesta, and a wide array of percussion played by four performers.

The work has a duration of around 14 minutes and it is on rental at Theodor Presser.

George Rochberg on Black Sounds:
“In 1964, I wrote a large wind ensemble work entitled Apocalyptica – from this work I drew the material for a 17-player wind piece called Black Sounds. This new work was done in 1965 on commission from Lincoln Center for a dance called The Act, choreographed by Anna Sokolow for inclusion in a special TV composite project Lincoln Center, developed in cooperation with WNET, New York; later that show was awarded the Prix d’Italia. Since the dance concerned itself with the “act of murder,” the music, to be appropriately “black” had to be unrelenting in its intensity, dark in its gesture. The result was a totally chromaticized texture, though not necessarily atonal. In a through-composed, single movement, Black Sounds, is stylistically consistent from beginning to end. At the time I wrote it, I also thought of it as an “homage” to Varese, whom I admired greatly for his directness and power of dramatic expression.” (From the editor’s webpage).

Apocalyptica, for Large Wind Ensemble, from which the material of Black Sounds is derived, was commissioned by the Montclair State College Band.
These are the two works for winds by George Rochberg.

George Rochberg attended the Mannes College of Music, where his teachers included George Szell and Hans Weisse, then the Curtis Institute of Music, where he studied with Rosario Scalero and Gian Carlo Menotti.
Rochberg served as chairman of the music department at the University of Pennsylvania until 1968 and continued to teach there until 1983. In 1978, he was named the first Annenberg Professor of the Humanities.

Most of his works are held in the archive of the Paul Sacher Foundation in Basel, Switzerland.