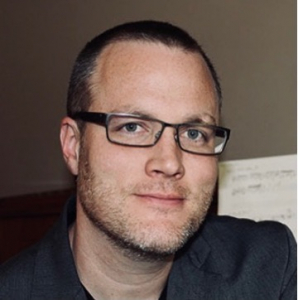 Beacons, by American composer Peter van Zandt Lane is our Composition of the Week.

Beacons was composed for Cynthia Johnston Turner (to whom the piece is dedicated) and the Hodgson Wind Ensemble at the University of Georgia, and premiered at the for the College Band Directors National Association (CBDNA) National Conference in Kansas City, Missouri, on March 16, 2017.

Beacons has a duration of around 15 minutes and it is cast in four movements:

« Beacons began as a reworking and expansion of a piece composed in 2011 for Dinosaur Annex Music Ensemble (a contemporary chamber ensemble based in Boston), premiered as a side-by-side ensemble of professional players and advanced high school students. In its original chamber form, I was interested in using imitation to gradually shift the ‘who is following whom’ from the students imitating the professionals early in the piece, to the professionals imitating the students later in the piece. This decision to empower the younger players was very much rooted in my own creative development at the time: I was reconnecting with much of the wind ensemble music that inspired me to take up composition as a teenager and trying to connect it with what I felt was becoming my own idiosyncratic compositional voice.

After the premiere in 2011, I had hoped I might someday be able to use the material in a piece for wind ensemble, and thus sat an unfinished re-arranging of the piece on my desk for five years. When Dr. Cynthia Johnston Turner asked for a new work, I decided it would be a perfect opportunity to expand the piece and connect it to the medium that inspired much of it. The first three movements, Daybeacon, Relays, and Orbital Lights, were each reimagined to take advantage of the range of sound offered by the larger ensemble. I composed Polaris to be an extra movement, not in the original version, at the recommendation of several friends and mentors who said the piece was in dire need of a finale.

While the piece is not narratively programmatic, each movement was inspired by images I associate with different types of beacons. Daybeacon imagines choppy waters, as we hear the main theme submerged and shifting. Relays is associated with relay beacons, passing rhythms and phrase fragments in paths around the ensemble. Orbital Lights is inspired by an imaginary lighthouse scenario: a beam of light, slowly revolving chord progression (led by the piano, harp, and guitars), one-by-one illuminate faint, shimmering textures underneath a placid surface. These textures become more or less clear upon each rotation, but softly disappear as therojectted light passes by. Polaris seeks to capture the radiance of the North Star in a dark sky, freely pulling together moments from each of the first three movements» (Program Notes by composer)

He has received fellowships at MacDowell Colony, Yaddo, the Virginia Center for the Creative Arts, the Atlantic Center for the Arts, and Brush Creek. He was a member of Composers in Red Sneakers and is an active bassoonist with a focus on contemporary music.

Professor Lane was awarded the esteemed Charles Ives Fellowship as one of eighteen recipients of the American Academy of Arts and Letters 2018 Music Awards.